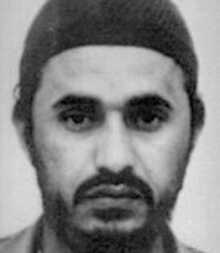 Al-Zarqawi is believed to have taken refuse in the city of Basra after fleeing Fallujah. Photo by bbc
Iraqi and UK troops from the coalition forces, are conducting a massive search raid for Jordanian terrorist Abu Musab al-Zarqawi in the southern Iraqi city of Basra.

Al-Zarqawi is believed to have taken refuge in the city after fleeing Fallujah.

Fifty suspected members of Al-Zarqawi terror group have been arrested during the operation.

Last week US troops claimed to have found the main headquarters of the insurgent group headed by Al-Zarqawi in Fallujah.

In video shot by an embedded CNN cameraman, soldiers walked through an imposing building with concrete columns and with a large sign in Arabic on the wall reading "Al-Qaeda Organization" and "There is no God but Allah and Muhammad is his messenger."

Inside the building, U.S. soldiers found documents, old computers, notebooks, photographs and copies of the Quran.