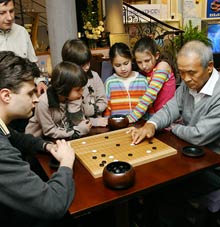 The Japanese game of Go intrigued both kids and adults at the second Go tournament in Sofia. Photo by Yuliana Nikolova (Sofia News Agency)
Sofia saw Saturday the second tournament of Go, a Japanese game of strategy with many ties into Japan's culture. The event was organized by the Bulgarian Go Association in a bid to popularize the game in Bulgaria and was attended by Endo San, First Secretary at Japanese Embassy in Sofia.

Go is a simple game with a complex strategy. Games can be played on a 9 by 9, 13 by 13, or 19 by 19 line board. Go pieces, which are black and white "stones", are placed on the intersections of lines. The game focuses on these points, which number 361 on a 19 by 19 board, and the player who has surrounded the most points by the end wins. Players may also capture their opponent's pieces by surrounding them with pieces of a player's own color.

The most obvious difference from chess is that Go pieces never move after the have been placed, and each piece has the same value as other pieces (no queen, king, pawn, etc.). Many people say the vast amounts of combinations and possible moves make Go a more strategic game than chess.