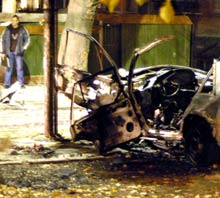 The explosive was lying in the lap of the man, who intended to put it under the car seat, according to the initial information.

The name of the man is Marin Georgiev, and he has a criminal record, police officers added.