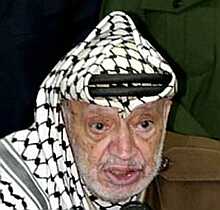 His assumption came after medics ruled out leukaemia, but still could not name the reason for the President's sharply deteriorating health.

Arafat was taken to a French hospital earlier this week, where he slipped into a coma. There were even reports about the Palestinian leader being brain dead, but that information was later disproved.

On Friday, unnamed Palestinian sources were cited as saying that the President had regained consciousness, and even communicated with the doctors. Hospital officials, however, remained silent about the report.