WHO'S WHO: Yasser Arafat 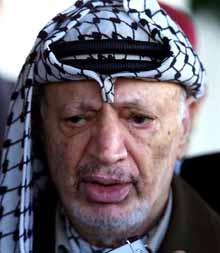 Yasser Arafat. Photo by www.niftythings.org
For decades Yasser Arafat has been the leader and figurehead of the Palestinian people's struggle for statehood.

He has carried on his shoulders the burden of that struggle. But his refusal to share power or delegate responsibility has taken a toll on his health and often damaged his popular support.

His latest health problems began around October 20 with stomach pains, and one of his ministers has described him as "very, very sick". He has been flown to Paris for treatment.

The illness has raised serious questions about the succession to his rule - his power is so personal that other Palestinian leaders have tended to be in his shadow.

When the Oslo peace process failed to live up to expectations, more and more Palestinians lost patience with his mercurial and dictatorial style of leadership.

However, in an ironic twist of fate, Arafat has won back a lot of Palestinian support thanks to Israel's attempts to sideline him.

Until he left for France on October 29, Arafat had been confined by Israeli forces to his battered headquarters in the West Bank town of Ramallah since December 2001. The siege came to be regarded as a potent symbol of the draconian measures exacted by the Israeli Government.

From his earliest days, Arafat has indulged in the weaving of myths about his life, insisting, for example, that he was born in Jerusalem even though his birth, in 1929, is clearly recorded in Egypt.

As a young man he was, according to one biographer, "a natural publicist" and a workaholic. At the same time, he developed an obsessive desire to be leader of the pack and to get his way.

As early as 1959, as Palestinian exiles in Kuwait were forming Fatah, later to be the biggest group within the Palestine Liberation Organisation (PLO), Arafat was only paying lip service to the idea of collective leadership.

Two years later his contemporaries noticed how he "exercised total control over the Fatah war chest and how he bribed people to join him".

But he also did more than anyone else to put the Palestinians' cause on the world agenda.

Arab regimes were clearly not prepared to act to help the Palestinians so, led by Arafat, the PLO took up arms themselves, hijacking airliners and committing other acts of violence.

As a military leader, Arafat often led the way into action against the Israelis. When backs were against the wall, when he took on Israel at Karameh in 1968, or Jordan in September 1970 or under siege in Beirut in 1982, Mr Arafat never lacked personal courage.

His armed campaign against Israel launched from neighbouring countries, first Jordan and then Lebanon, led to his expulsion from these countries and eventual "exile" to distant Tunisia.

The presence and activities of Palestinian fighters in Lebanon was one of the causes of the Lebanese civil war there and the Israeli invasion.

His goal has always been independence for the Palestinians, with himself as president.

In 1987, with the outbreak of the Palestinian uprising, or intifada, in the Israeli-occupied West Bank and Gaza, Arafat risked being sidelined, but was able to harness the a home-grown uprising that was little to do with him.

From a position of relative weakness, Arafat started making peace with Israel and renounced armed struggle.

Though great progress was made in the negotiations leading to the foundation of the Palestinian Authority and the handover to Palestinian control of parts of the occupied territories, the negotiation process collapsed at talks in the US in September 2000.

Arafat is blamed by the US and Israel for rejecting a generous offer. Arafat insists that basic Palestinian demands were not met and it was not a deal that he could have sold to his people.

Israel blames the uprising that followed the failure of talks on Arafat. He failed to reign in Palestinian militants, and, the argument goes, his backing for the armed intifada was a tactical attempt to gain concessions through violence.

Israeli and US refusal to deal with him and insistence that he hands over power to a prime minister, do not appear to have worked.

Palestinian prime ministers have come and gone, and Arafat, until his recent severe illness, was still very much in charge from his battered headquarters in Ramallah.