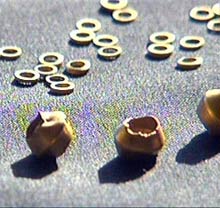 More than 400 gold jewelry pieces were exhibited Thursday in National History Museum. They are supposed to trace the location of a large gold jewelry workshop existed some 5,000 years ago. Photo by Yuliana Nikolova (Sofia News Agency)
About 400 pieces of gold applications have been found so far during the excavations at an Early Bronze Age village in Bulgaria, archeologists announced on Thursday.

Members of the expedition, organized by the National History Museum, admitted that each day some 10-15 new items have been discovered, including gold applications for clothing, beads, rings and many other objects, some of which with unclear purpose.

Archeologists believe they have found an ancient jewelry workshop, where exclusively fine pieces of highest quality were produced.

The gold pieces, found in an area of about 50 sq m, are dated to the end of 4000 - the beginning of 3000 BC, which means that they are about 3,000 years older than the Thracian gold treasures recently unearthed by the team of Dr Georgi Kitov near Kazanlak.

The exact site of excavations, headed by Prof Dr Vassil Nikolov, will be kept in secret till the end of the expedition.

Only few gold jewels of this kind have been found in Bulgaria so far.