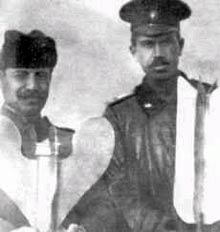 Bulgarian pilots Radul Milkov (L) and Prodan Tarakchiev were the first ever to use an aircraft as a bomber during the Balkan War, October 16, 1912. Photo by geocities.com
Bulgarian Air Forces marked Saturday nearly a centenery of modern aviation, as its first pilots heralded the start of world military aviation in the beginning of last century.

It was on the far date of October 16, 1912, during the Balkan War, when Bulgarian pilots Radul Milkov and Prodan Tarakchiev took on their planes and launched them into military action, for the first time in warfare history. They also took the first aircraft-shot wartime pictures.

Today's pilots, technicians, anti-aircraft gunners and radiolocators, signalmen and rear-servicemen succeed with professional dignity the deeds of their ancestors, reads the official greeting address by President Georgi Parvanov who is also a Supreme Commander of Bulgarian Army.

READ MORE in today's For the Record section