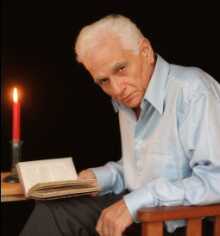 Derrida died in a Paris hospital Friday, it was announced a day later. He was suffering from pancreatic cancer.

The Algeria-born philosopher is one of the most influential philosophers of the late 20th Century. He has taught at the Sorbonne and at several US universities.

MORE about Jacques Derrida - READ TODAY in For The Record section