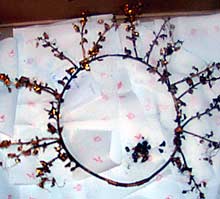 According to archeologists, the gold wreath from the Golyamata Kosmatka mound tomb depicting oak leaves and acorn nuts is one of the kind known to scientists from Thracian times, about 25 centuries ago. Photo by bTV
Bulgarian archaeologists have discovered a gold treasure hidden in the recently unearthed Thracian tomb believed to be the oldest and largest discovered in Bulgarian land so far.

The three-chamber tomb has been unearthed from beneath the Golyama Kosmatka mound, in the outskirts of the Shipka Peak.

The archeological team's head Georgi Kitov, called also Bulgaria's "Indiana Jones" explained that the excavations have revealed a 13-metre long passage and two halls walled up with stones behind the faзade.

The tomb has amazed archeologists with its first-of-the-kind doors made of marble and decorated with human figures, iron nail imitations and blue-end-red sculptural ornaments.

Further on, the first chamber showed up in a rectangular and vaulted form where a horse skeleton was found.

The archeologists from the TEMP 2004 expedition have found a total of 74 artifacts, including 20 made of pure gold, in the unsealed second chamber. The third chamber hall appears to have stored the body of the wealthy man buried inside the tomb.

The start of the excavations were heralded by finding an impressive bronze head supposedly belonging a Thracian ruler believed to be a craftswork of renowned ancient sculpturer Phidias.

During the excavations of another mound nearby, Svetitsata (The Saint), Georgi Kitov and his team have also unearthed the unique gold mask likely to depict the face of a mighty Thracian king.