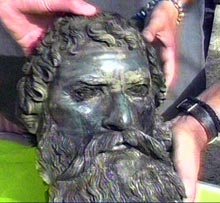 Bulgarian archaeologists will receive additional money to continue their work in the "Valley of Kings" where the bronze head of a Thracian ruler, unique gold mask and one of the oldest sanctuaries in the world were found. Photo by bTV
Bulgaria's archaeological expedition TEMP 2004 will receive additional BGN 20,000 to continue its work in the so-called "Valley of Kings" near the city of Kazanluk.

Kazanluk's mayor Stefan Damyanov will allot the money for the expedition. The mayor also pledged that he would do his best to preserve and protect the region rich in archaeological findings.

Georgi Kitov's team unearthed on Friday an ancient sanctuary, which is probably one of the oldest temples in the world. The temple dates back to the beginning of 5th century BC. It has been set on fire by the Thracians.

Kitov said that the archaeologists will be able to go in the sanctuary on Monday.

Also on Sunday the major archaeological spot was visited by Bulgaria's President Georgi Parvanov, who said that the Golyamata Kosmatka mound, where the sanctuary was unearthed should be included in the Balkans' Cultural Corridors.

The Thracian sanctuary was found in the same mound where the bronze head depicting a Thracian king, near the Shipka Peak, was revealed and where the excavations of the TEMP 2004 expedition had earlier unearthed the sensational gold mask.

In the words of Georgi Kitov the bronze head found in the antechamber of the sanctuary was buried there after the temple was set on fire. He also expressed hopes that the body of the statue will be in the sanctuary.