WHO IS WHO: Ivan Slavkov 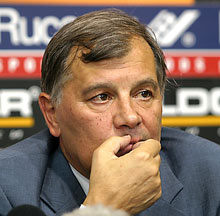 He was born in Sofia May 11, 1940. He is married and has two children. Slavkov graduated in Sofia's Higher Institute of Electrical and Mechanical Engineering. Slavkov is a professor of sport sciences at the State University in Kiev, Ukraine. He is also Doctor Honoris Causa of the Bulgarian National Sports Academy.

Slavkov was General Director of the Bulgarian National Television (1971-1981). He was also Deputy Culture Minister of Culture since 1976 to 1981. Since 1974 to 1982 Slavkov was chairman of the National Club for the Young Intelligentsia. He was also president of cable television Tivia.

Ivan Slavkov was elected president of the Bulgarian Olympic Committee in 1982. He became a lifetime member of the IOC.

Slavkov is son-in-law of Bulgaria's former communist leader Todor Zhivkov, and was acquitted in 1997 on charges of embezzling from the Bulgarian Olympic Committee. In 2000 the leader of Cape Town's candidacy for the 2004 Summer Olympics accused him over approaches by a businessman said to be selling votes of IOC members. An investigation failed to establish any Slavkov involvement.