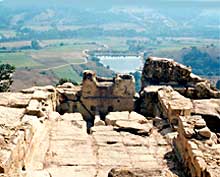 The pictograms, painted on 3, 000 year-old ceramic utensils, were found in the grandiose religious centre Perperikon.

In the end of July excavations proved that Perperikon was the capital of an ancient civilization called "The Mountain people".

In ancient Greek history the Perperikon sanctuary has been as important as that of Apollo at Delphi.