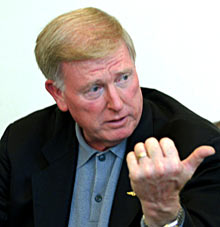 McBride, who is in Bulgaria upon the special invitation of Bulgaria's first cosmonaut Georgi Ivanov, said that in his opinion the biggest challenge for the mankind will be to step on the Moon once again.
The Cosmos has a lot of hidden secrets, McBride said.