Bulgarian Beheading Video on the Net 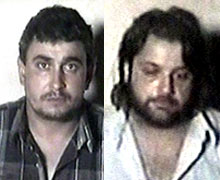 The al-Tawhid wal Jihad terror group that abducted two Bulgarians in Iraq threatened to publish on its Internet site the video showing the beheading of one of the hostages.

"Await for a video with the execution of the Bulgarian unbeliever" reads the Tawhid wal Jihad Internet site cited by the Bulgarian National Radio.

A picture with a militant holding a severed bloody head is also published. The man is standing in front of the terror group flag with a Sunni-style slogan "There is no other God besides Allah."

The text says it is a warning to the allies of US President Bush, "the fool whom those obey and ally with".

It also says that Bulgarian government declined to bow to the "lawful" claims of the mujaheddines. That government is an ally of the Americans and is taking part in the crusade against Iraq, the statement also reads at the web site(http://www.hostinganime.com/iraqnews1/ ).

Bulgarian truck drivers Ivaylo Kepov, 32, and Georgi Lazov, 30, were abducted June 29 near the northern city of Mosul. A group affiliated with al-Zarqawi said it kidnapped the Bulgarians and demanded Iraqi detainees be released in exchange for their lives. The group later sent a tape to Al-Jazeera television that showed Lazov being killed. His death was official confirmed last Thursday.

Kepov's fate is still not clear though Bulgarian media cited Thursday an Iraqi official who said that the Bulgarian is dead and his body has been found.

READ MORE at the Point of View section