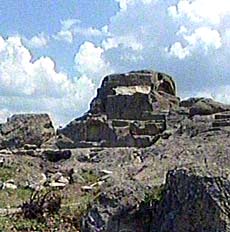 Though most of the archaeologists in the expedition assume that the Thracian temple was dedicated to the mythical Orpheus, there are still some suggestions that that it might have been built in honour of a Thracian king.

The sanctuary is a unique finding and a monument of the Hellenistic ages in Bulgaria, Professor Ovcharov explained. It has hidden many of the ancient sacraments and rituals administered there.

Bulgaria's history Professor Ivan Venedikov presupposed 75 years ago that somewhere in the roundabouts of Tatul tomb was the grave site of Thracia-born Orpheus.

An overall complex of other images and constructions is situated in vicinity of the tomb, including a ritual stairway on the tomb's lower part.

MORE About Orpheus READ in For the Record Section