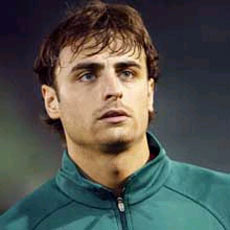 The CSKA PFC player Dimitar Berbatov has all the qualities necessary to be a top striker, combining strong physique with impressive speed and a deft touch.

He has played a total of 29 matches with the national squad, confirming his fame as a goalmaker with 19 successful strokes.

Berbatov played for his local side PFC Pirin Blagoevgrad until he was spotted by PFC CSKA Sofia manager Dimitar Penev, the former Bulgaria star, in 1998. He struck 26 goals in 49 appearances for CSKA, winning a Bulgarian Cup in 1999.

A move to Italian club Lecce looked on the cards, only to fall through at the last minute.

However, shortly after Berbatov produced a five-goal blitz in an 8-0 UEFA Cup qualifying round thumping of Constructorul from Moldova, CSKA announced they had agreed a USD 1.2 M deal to sell him to Bayer Leverkusen in January 2001, just before his 20th birthday.

Once he arrives in Germany in January, Berbatov faces stiff opposition for a first-team place from the likes of Ulf Kirsten and Oliver Neuville, but he remains undaunted.

Berbatov struggled to adapt during his early months at the BayArena but enjoyed more success in the 2001/02 season.

"I'm proud to have the chance to play for one of the best clubs in Germany. A lot of Bulgarians have gone to Germany and become better players. I hope to do the same," he said.

He scored eight league goals in 24 appearances - 16 of which were as a substitute - and another two in the UEFA Champions League, including a crucial strike against Liverpool FC in the quarter-final.

Leverkusen finished runners-up in the Bundesliga and German Cup and lost to Real Madrid CF in the Champions League final.

Berbatov secured a regular place in the side in 2002/03 but managed just four goals in 24 games as Leverkusen struggled to avoid relegation.

He made his international debut as an 18-year-old in a friendly against Greece in 1999 and has since taken over from Hristo Stoitchkov as Bulgaria's leading marksman.

Berbatov scored his first goal against Chile in February 2000 and went on to register 15 times in his first 25 matches.

Berbatov was Bulgarian Footballer of the Year in 2002.

His goals and all-round forward play were one of the main reasons for Bulgaria's successful campaign for the EURO 2004 qualifiers. The striker scored five times in six matches, including crucial strikes against Group 8 rivals Croatia and Belgium.

With the likes of 23-year-old Berbatov, midfielders Stilian Petrov and Georgi Peev, and forward Svetoslav Todorov in the squad there is great cause for optimism in Portugal.


Prior to Bulgaria's debut in EURO 2004 on June 14 against Sweden, Novinite.com will briefly introduce you to all members of the national football team.