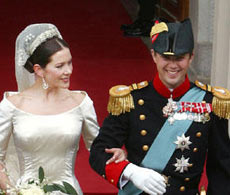 Mary Donaldson is the first Australian to become a princess. She married Danish Crown Prince Frederik in a fairy-tale wedding ceremony. Photo by DW.
Deutsche Welle

Four years after Frederik and Mary met at a bar in Sydney during the 2000 Olympic Games, the groom's eyes filled with tears as his bride, dressed in a champagne-colored gown by Danish designer Uffe Frank and wearing the wedding veil of former Danish Queen Ingrid, walked down the aisle.

Royalty from around the world, including the kings and queens of Norway, Spain, Sweden and the Netherlands as well as Japan's Crown Prince Naruhito were in attendance as the wedding couple tied the knot in Copenhagen's Our Lady's Cathedral.

England's Queen Elizabeth II., who had also been the bride's head of state until Friday, sent her youngest son Edward to represent her.

Outside the cathedral, hundreds of thousands of Danes were waving Danish and Australian flags tourism officials had been handing out since the morning. The country's civil servants received the afternoon off to join in the celebrations and many others took the day off work to witness the first wedding of a Danish heir to the throne since current Queen Margrethe married her husband, Prince Henri, in 1967.

Donaldson, 32, who will now be known as Crown Princess Mary, previously worked as a real estate agent and marketing executive. The native of Hobart, Tasmania didn't know that Frederik was a prince when she met him, and the first year of their relationship was kept secret so that they could get to know each other outside the glare of the spotlight.

Donaldson has described their romance as a fairy tale, and has endeared herself to the people of Denmark by learning the language, adopting Danish citizenship, and converting to the Lutheran church.

Frederik, who is three years older than his bride, is also popular among Danes for his common touch. Lately, his popularity has increased as he showed that he can do more than open hospitals and plant trees: A fan of extreme sports, in 2000, the crown prince went on a dogsled trek spanning 2,795 kilometers (1,730 miles) along northern Greenland, which belongs to Denmark.

Despite the monarchy's approval ratings of 82 percent, several thousand police officers lined the streets to protect the wedding guests. The air space over the city was closed while police boats patrolled the harbor.

The royal entourage won't have much time to recover from Friday night's wedding banquet at Fredensborg castle. Next Saturday it's on to Spain, where Crown Prince Felipe will marry Letizia Ortiz, a former TV journalist. Both attended the Danish royal wedding.