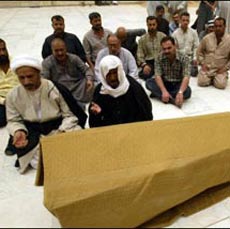 Iraqi Shiite Muslims mourn a relative killed the day before in the holy city of Najaf. Negotiations between the US-led coalition and militants failed on Saturday. Photo by AFP
Armed clashes and exchange of fire between the coalition forces and the Mehdi army were reported in and around Najaf after a break down in negotiations, Al-Arabia television network reported.

An aide of rebel Shiite cleric Moqtada al-Sadr has said earlier that the US troops are in a position to attack Najaf "any moment." He warned that an American attack against Najaf would trigger a massive revolution.

The US had stationed forces outside both Najaf and Falluja, but their troops were so far held back.