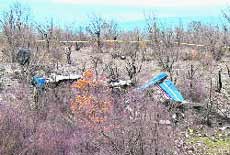 The newspaper says that there have been some doubts on whether the expertise should be carried out in Germany or in the UK, the two boxes, however, were sent to Germany. The results of the check should be ready within 60 days.

On Thursday Skopje will bid farewell with late Macedonian President Boris Trajkovski and the eight members of the Macedonian delegation, who were killed in a plane crash last week.

Trajkovski's funeral is scheduled for Friday with full state honors.

Trajkovski was declared missing and presumed dead after his plane came down between former frontlines in the 1992-95 Bosnian war, in an area of low hills between the towns of Mostar and Stolac.