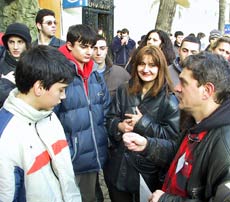 The lucky winner in the competition studies in London and lives there with his parents. His name was not disclosed.

Until the last moment, British casting directors hesitated whether the part should go to the London-living teenager, or to one of two other Krum wannabes. They were among the 46 candidates whose taped appearances were sent to London by a Bulgarian jury, led by producer Victor Bozhinov.

The Warner Brothers London office initially picked half of the "best choice" Bulgarian aspirants, eager to be cast as Viktor Krum in the fourth Harry Potter movie. Out of them only two boys made it to the next stage, but eventually the jury gave them both the thumbs down.

I am not aware of the reasons behind the decision to drop all the selected candidates from the casting in Sofia, Bozhinov, who orchestrated the casting in the Bulgarian capital commented. Being a director of considerable experience he underlined it is not an unusual practice to turn down all the candidates from a casting for a given part in a movie.

There was a possibility for a Romanian boy to sweep the part of Viktor Krum, should the directors in London have dropped altogether the idea to give the role to a Bulgarian.

London confirmed the part of Harry Potter partner in the next movie will go to a Bulgarian boy, Bozhinov reiterated. The casting director in London broke the news in a telephone conversation.

The information is still to be re-confirmed by an e-mail, Bozhinov said.

It was a tough choice for people in London, because they were impressed by many of the Bulgarian candidates, Bozhinov told Bulgarian media.

Over 600 kids flocked to the first round of the casting that took place in Sofia on February 4 and 5. However, most of them didn't make it to the final stage. The ones selected were interviewed for a few minutes, their performances taped and sent to London.

The candidates for the role of the 17-year-old captain of the Bulgarian Quidditch team, one of the leading roles in the movie, were required to be aged 15-19, swarthy boys in good health. Some knowledge of English was also obligatory.

London has turned down the suggestion that the whole team Krum leads be played by real Bulgarians in the movie.

The shooting of Harry Potter and the Goblet of Fire will start in April, its premiere is scheduled for 2005.