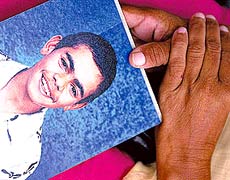 Australian Aborigines triggered off a riot in Sydney following the death of a young Aboriginal cyclist. It is one of worst outberaks of civil unrest facing Australia's capital. Photo by AFP.
Australian Aborigines have rioted in a ghetto near the centre of Sydney following the death of a young Aboriginal cyclist. Hurling Molotov cocktails and bricks at police in a nine-hour battle that ended on Monday, dozens of police were injured - many with broken bones. The riot is one of the worst outbreaks of civil unrest in Sydney in at least a decade. It was triggered by the death of Aborigine Thomas Hickey, who was impaled on a metal fence after falling from his bicycle on Saturday. He died in hospital on Sunday morning.