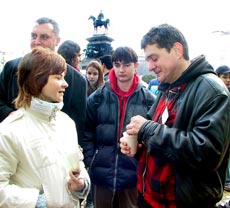 Actress M. Bedzanska (L) and movie director A. Kossev (R) are on jury that is to elect the most suitable Krum wannabes for the next Harry Potter film. Photo by Yuliana Nikolova (novinite.com)
Hundreds of Bulgarian kids flocked Wednesday in front of "Studentski Dom" in capital Sofia on the first day of the casting for the Viktor Krum part in the world blockbuster Harry Potter.

Bulgarian kids of all ages and looks attracted by the prospect of becoming a part of the word Harry Potter mania appeared to take part in the casting.

The audition started 9 a.m. continued till 5 p.m. It will continue on February 5.

Despite the strict requirements for the outlook of the candidates: strong boys, with hooked nose, shaggy eyebrows and dark hair aged 15 to 19, both girls and boys of all ages, blonde, red-haired or brunets could be noticed at the square in front of "Studentski Dom".

Most of the children came with their friends, while others appeared with their parents.

The crowd was reinforced by the hordes of journalist equipped with cameras and microphones, chasing each kid that managed to enter the casting building.

A special team including famous actress Maya Bezhanska decides which of the candidates should be allowed to take part in the casting judging by the resemblance with the outlook of Krum.

The major Harry Potter mania overwhelmed Bulgaria a week ago after Bozhinov revealed that the English company shooting the blockbuster asked him to find a kid for the Krum part in Harry Potter and the Goblet of Fire. Bozhinov told Novinite.com that perfect knowledge of English was not a must since Krum is a character of few words.

Media reported that after the casting the gathered material will be sent to London and by the next week it will be clear whether there will be a Bulgarian boy in the next Harry Potter.