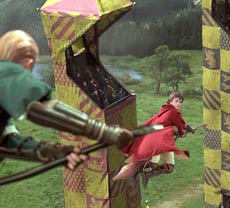 Casting for the character of Victor Krum, from the 4th Harry Potter blockbuster, will take place on Feb 4-5 in Sofia. The magic quidditch team was inspired by Bulgaria's victorious playing at World Cup 1994, when the country swept 4th place. Photo by AFP.
Famous Bulgarian actress Maya Bezhanska will be a jury member at the casting for the part of Viktor Krum in the fourth Harry Potter film, Casting Director Victor Bozhinov told Novinite.com on Sunday.

Bezhanska is a professional actress, but hit big time in 1993 with her music debut - a duet with Stefan Valdobrev entitled "I Love You Honey". Six years later, she put out a solo album, Lemon, and the song "Which Way" climbed up local charts for weeks. She starred in several films, and is involved with puppet theater - what many people say is her special line, because of her matchless shrill voice and child-like appearance.

The casting takes place at the "Studentski Dom" in Sofia on two successive days - February 4 and 5, from 9 a.m. to 5 p.m., Bozhinov explained. He added that a large number of children from all over the country, induced by their ambitious parents, were expected to bid for the part.

The candidates for the role of the 17-year-old captain of the Bulgarian Quidditch team, one of the leading roles in the movie, are required to be aged 15-19, swarthy boys in good health. Some knowledge of English is also obligatory. Their appearance must answer to a certain extent the not-so-flattering description of the character in the book - dark, bushy eyebrows, a crooked nose and a slouch.

Perfect knowledge of English is not a must, however, since Krum is rather a character of few words, Bozhinov told Novinite.com.

He explained that each of the candidates that has the specific appearance would meet jury members and share some general facts about themselves. Those short conversations will be videotaped, and about 15-20 of them will be sent to London for further selection.