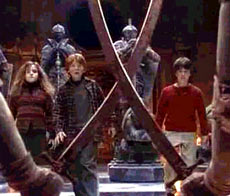 Shootings on the fourth Harry Potter blockbuster by British writer JK Rowling will start in April. A Bulgarian kid is wanted for the role of 17-year-old Victor-Krum, a young fellow magician. Photo by AFP.
The English company shooting the blockbuster Harry Potter is searching for a kid to play the 17-year old Viktor-Krum in the successive part of the film about the young magician.

One of the casting directors contacted Bulgarian producer Victor Bozhinov asking him to organize a casting in Sofia.

Bozhinov, himself, announced that casting director was worried by the little time left as the shooting of Harry Potter and the Goblet of Fire will start in April. He explained that the movie directors are aiming to create authentic atmosphere and as in the JK Rowling book Viktor-Krum is a Bulgarian boy it was decided that someone from the Balkan country has to play that part.

The only requirements for the kids will be fluent English, artistic skills and charm. The boys that are approved will be sent to England for some tests.

Harry Potter and the Goblet of Fire premier is planned for 2005. In the book of JK Rowling the young magician and his friends Hermione and Ron are great fans of the Bulgarian quidditch team headed by Viktor-Krum.