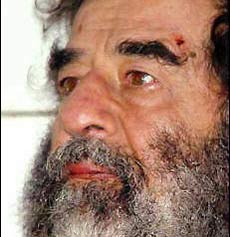 Ex-president of Iraq Saddam Hussein was captured Dec 2003 nearby his hometown of Tikrit by US forces. Photo by AFP.
The ousted Iraqi dictator, who is currently under custody with the coalition forces, suffers from cancer of lymph glands, Kuwaiti Al-Anba daily reads, citing an Iraqi official. According to the daily, the disease is in an advanced stage, so doctors predict the former dictator would probably live a couple of years more.

Doctors came out with the fatal diagnosis while making thorough medical checking of Saddam Hussein at his capture near his hometown of Tikrit in December 2003.

Allegations of Saddam's illness appeared during the military campaign in Iraq last year, when one of his private doctors, residing in Syria, claimed that the former dictator suffered from cancer.