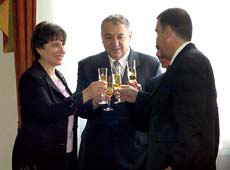 Former world shooting champion Nonka Matova (left) celebrates her promotion to major-general. She has worked with the Bulgarian police for decades before taking over her current post as MP of the ruling party. Photo by Yuliana Nikolova (novinite.com)
Former world shooting champion and long-time police officer Nonka Matova was promoted major-general by Bulgaria's president on Friday. The shooter has been working with the country's Interior Ministry for twenty-four years. Two years ago she took a leave to become a MP of the ruling party. The president also awarded the same title to three other colonels - one of them is the chief of the fire fighter's service, the others work in regional structures of the Interior Ministry.