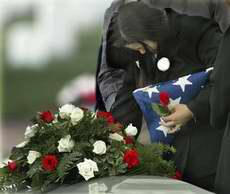 Hui Ok Davis, wife of Army Sgt. Wilbert Davis, holds the flag that covered her husband's casket, at Arlington National Cemetery in Arlington, Va.. Sgt. Davis was killed in Iraq in a vehicle accident on April 3. Photo by AP
"This holy season reminds us of the value of freedom, and the power of a love stronger than death," Bush, on a five-day stay at his 1,600-acre ranch, said in his weekly radio address.

Celebrating the weekend's Christian and Jewish observances, President Bush offered a message of religious hope and the nation's prayers Saturday to the families of soldiers who have died or been wounded in Iraq or remain deployed overseas.

Bush declared that the Easter and Passover holidays have "special meaning" this year for service members' families, "who feel so intensely the absence of their loved ones during these days."