From 8 am to 12 pm: Borissov changed his position on the Paper Ballots 3 times 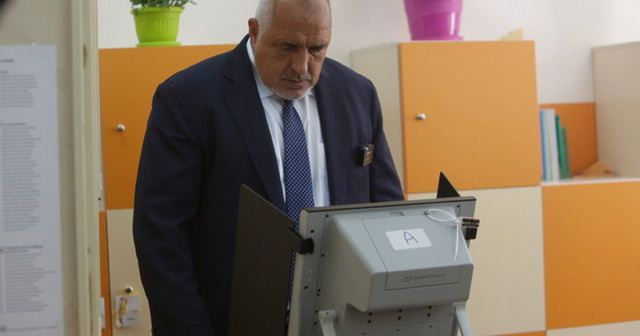 Boyko Borissov voting with a machine

GERB leader Boyko Borissov changed his mind three times about BSP's proposed changes to the Electoral Code and, in particular, whether his deputies would support a possible presidential veto on the return of paper ballots.

Early in the morning, in the morning block of Nova TV, Borissov surprisingly intervened on the phone during the interview of the former social minister from GERB Denitsa Sacheva. Interrupting her, he stated that if President Rumen Radev vetoes the changes in the electoral code, GERB will vote "yes". Later, Borissov explained that he joined the interview because the presenters behaved aggressively, even "anthropologically" it seemed.

Two hours later, at a briefing at the GERB headquarters, the former prime minister took a more evasive stance on the issue and stated that Ninova had not thanked GERB for their support for the changes in the electoral code, and that she quickly forgot about their help. Therefore, if there was a veto, they would still have to think about how to vote.

"Now we will see what the president will say - whether he will veto or not. There we will have a new conversation, because we cannot be bound in a kind of life belt with some parties. And even their pathetic attempts to tie us to the paper ballot and the electoral code, they cannot stick labels on us. We defeated them with their machines, with their flash drives, with their software and all the control they had. We supported BSP for the Electoral Code with the idea that then consensus can be sought with these parties' management," said Borissov.

And after the briefing, around 12 o'clock, in an exclusive interview with PIK (pro-GERB Bulgarian media) editor-in-chief Nedyalko Nedyalkov, Boyko Borissov suddenly announced "that he was wrong, that he succumbed to emotions" and that he would not support Radev's veto.

"I made a mistake, I succumbed to my emotions, we will not support a president's veto for the electoral code. And all the deputies of GERB are against it. I was infuriated by the malice of the presenters from Nova TV and the lies of Asen Vassilev that I was in collusion with Radev. You know very well that the president and I are the biggest opponents," he told PIK after Nedyalkov entered the headquarters with a camera and broadcast live and pressed the GERB leader to say whether he would support the veto.

When asked if Borissov was wrong with his inclusion on Nova TV, he replied: "No, not with the inclusion... I just shouldn't have said that we could support the president's veto. That was too much for me."

After Nedyalko Nedyalkov explained to Borissov that his supporters would be disappointed by the change in his position on paper ballots and that there was no one else but GERB to govern, Borissov "reassured" him that he had just "checked" the opinions of the Executive Committee and if there is a presidential veto, the MPs will not support it.

On Sunday, at a press conference, Boyko Borissov announced that he is the only worthy candidate for Prime Minister and compared himself to the great Argentinian goal scorer Lionel Messi. On Monday, GERB nominated Prof. Nikolay Gabrovski as a candidate for prime minister.