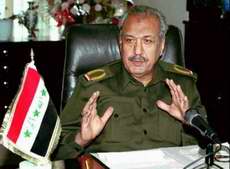 Hikmat Ibrahim al-Azzawi was number 45 on a list of 55 Saddam supporters most wanted by the United States and was also a deputy prime minister.

Azzawi was the eight of diamonds in a deck of cards issued to U.S. troops hunting the overthrown Iraqi administration.

He was captured the same day that one of Saddam's top scientists - depicted as the mastermind of Iraq's nerve agent program - turned himself in to the Americans. The apprehension of Emad Husayn Abdullah al-Ani raised hopes of a breakthrough in the as-yet-fruitless search for banned chemical and biological weapons inside Iraq.