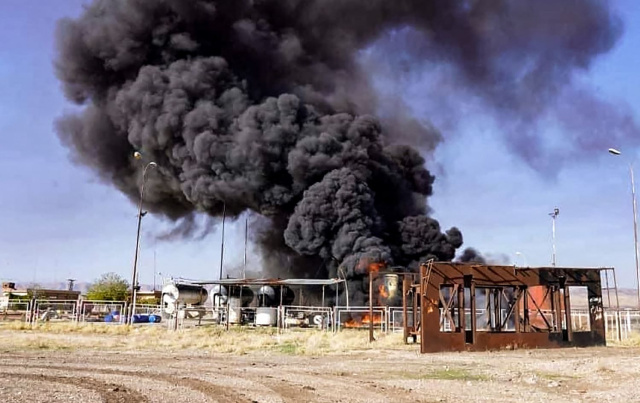 Turkey's airstrikes in northern Syria are just the beginning of a campaign against the Kurdish People's Protection Forces (YPG), which will continue with a ground offensive in their wake.

This was stated by President Recep Tayyip Erdogan, the BBC reported, four days after the start of the airstrikes. The YPG, which Ankara sees as the Syrian offshoot of the Kurdistan Workers' Party (PKK), designated a terrorist organization by Turkey and the West, said at least 30 civilians and 11 of its fighters were killed in the strikes.

It and the PKK also deny having anything to do with the attack in Istanbul on November 6, which killed 6 people and wounded 81. The YPG is part of the US coalition against the Islamic State group.

Speaking to the ruling Justice and Development Party, Erdogan said Turkey was determined to secure its border with Syria and create a "security corridor" "stronger than ever". He earlier confirmed that the ground operation would begin "at the appropriate time".

Criticism from both Moscow and Washington

The Pentagon, meanwhile, has warned that Turkish airstrikes in northern Syria threaten the safety of US military personnel. According to gen. Patrick Ryder of the Air Force “the escalation puts years of progress against the Islamic State group at risk”. The Syrian Democratic Forces (SDF), whose backbone is the YPG, helped defeat the group in the north of the country. According to the US and its allies, there is still danger, and more than ten thousand jihadists and their relatives remain in custody the coalition.

SDF commander Mazloum Abdi, who has become one of the faces of the formation, told Al Monitor that, according to him, the main target of the offensive will be his hometown of Kobani. The SDF and the Syrian Observatory for Human Rights reported yesterday an attack on the Al-Hawl camp, where relatives of fighters are being held, and the US military reported an attack on the Kobane headquarters in Al-Hasakah.

So far, the US has not been so harshly critical of the Turkish operation. Washington had already warned Tehran over airstrikes against Kurdish fighters in Iraq, but had not done so for Ankara.

The US has approximately 900 troops in Syria. The contingent has dwindled to that number since 2019, when a withdrawal of most of it ordered by former US President Donald Trump cleared the way for Turkey's previous operation in northern Syria, targeting the Kurds. However, in the offensive in question, there was artillery fire against the American troops in the area.

Russia also issued a warning - again, but this time about the ground offensive - through the words of Russian Astana-based negotiator Alexander Lavrentiev. He expressed hope that Moscow's message would be heard in Ankara and "other ways to solve the problem" would be found. On Tuesday, Kremlin press secretary Dmitry Peskov called on Turkey to refrain from any "destabilizing" actions