Another Provocation! Shooting at the Bulgarian Club "Tsar Boris III" in North Macedonia 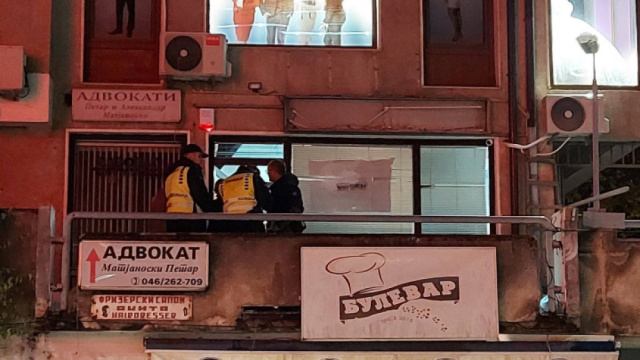 The Ministry of Foreign Affairs of North Macedonia condemned the attack on the Bulgarian club Tsar Boris III in Ohrid. Its windows were broken last night when a gun was fired. In the statement itself, the club is defined as civil only.

"The fact that these incidents of vandalism are repeated in a short period of time is worrying. Just a few days ago, on November 20, we witnessed a similar act of vandalism when the external glass of the club was broken. Such events are absolutely unacceptable. They may endanger human lives and strengthen the retrograde processes that are against the country's European integration," the announcement reads.

The ministry calls on the institutions to take the necessary measures to reveal the perpetrators and to guarantee the work of the civic clubs in the country.

The Bulgarian MFA will summon the RNM ambassador, Brussels has been informed of the armed attack

The Macedonian ambassador in Sofia will be summoned to the Ministry of Foreign Affairs today and will be handed a sharp démarche on the occasion of the armed attack on the Bulgarian cultural club "Tsar Boris III" in Ohrid, reported BGNES.

Already last night, the Bulgarian diplomats informed the management of the European Commission (EC) in detail about the serious incident in Ohrid. Around 20:00 local time last night, a magazine was emptied during the shooting against the Bulgarian club. Immediately after the attack, the Bulgarian consul in Bitola, Dimitar Ivanov, arrived on the scene. In the club premises alone, 8 cartridges were found inside. The correspondent of BGNES clarifies that there is a recording on which the car from which the shots were fired is clearly visible and it will not be a problem for the law enforcement authorities, if there is a real investigation, to find the attackers.

The RNM Ministry of Foreign Affairs expressed alarm at the incident and called on "the competent institutions to take the necessary measures to uncover the perpetrators and to take the necessary measures to guarantee the work of this and all other civil clubs in the country." According to the Ministry of Foreign Affairs of the RNM, "all citizens of the country had the freedom to express their beliefs and defend their rights, which are guaranteed by the Constitution of a worthy candidate country for EU membership".

In the announcement of the Macedonian MFA, it is not stated anywhere that it is an armed attack against a Bulgarian club.

This is another attack on the Bulgarian cultural club "Tsar Boris III" in Ohrid. On October 12 of this year, the inscription above the entrance door to the building was broken. And just a few days after the official opening of the "Vancho Mihailov" club in Bitola, the front door was set on fire, and the offender Lambe Alabakovsky was released.

Club "Tsar Boris III" was opened on October 7 amid organized chants of insulting words against Bulgaria, and stones and eggs were thrown against the building. Among the protesters, there were also those who waved the Yugoslav flag. Macedonian politicians, both from the ruling coalition and the opposition, did not condemn the protest, but described the opening of the club as a "provocation against Macedonian identity".

According to the quick procedure, with complete unanimity, a law was adopted, which in practice will mean the closure of the Bulgarian clubs in North Macedonia