US Team Hunt for WMD 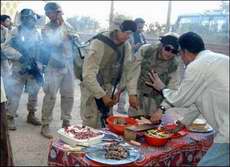 US soldiers line up to buy kebab sandwiches as shops reopened in Baghdad. Photo by AP
The United States is sending a 1,000-strong force to Iraq to hunt for weapons of mass destruction (WMD), Pentagon officials said, cited by AFP.
According to CNN reports initial elements of the WMD team are already on the ground in Iraq and the full contingent should be operational within two weeks, CNN quoted a Pentagon official as saying.

The CNN television network quoted US defense officials as saying the "Iraq Survey Group" would probably be led by a general and would consist of military personnel, government intelligence analysts, civilian scientists and private contractors.