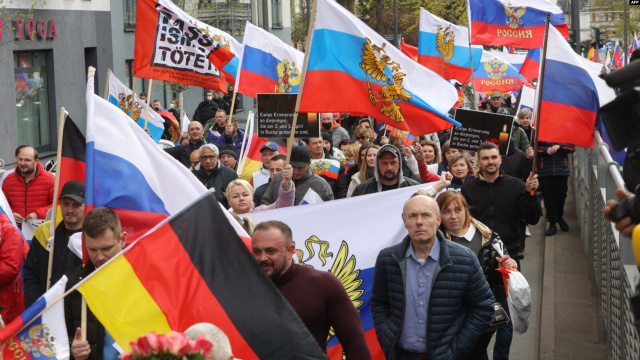 The number of Germans who believe in pro-Russian conspiracy stories about the war in Ukraine is growing. This is according to a study by the Center for Monitoring, Analysis and Strategy in the country (CeMAS).

According to these data, 40 percent of the respondents completely or partially agree with the statement that with the war Russia is responding to a provocation by NATO. To the question "Do you agree that NATO provoked Russia for so long that it had to go to war?" 19% answered affirmatively, 21% partially agreed.

For comparison, in April the sum of those who agree and partly agree reached 29 percent - 11 percentage points less

Those who believe in the "fascist government" thesis have doubled

At the same time, many more East Germans (59% of them) agree or partially agree with the mentioned statement according to the latest survey.

In addition to East Germany, the data also show a high share of pro-Russian attitudes, as expected, among the voters of "Alternative for Germany".

What exactly are the Germans responding to? 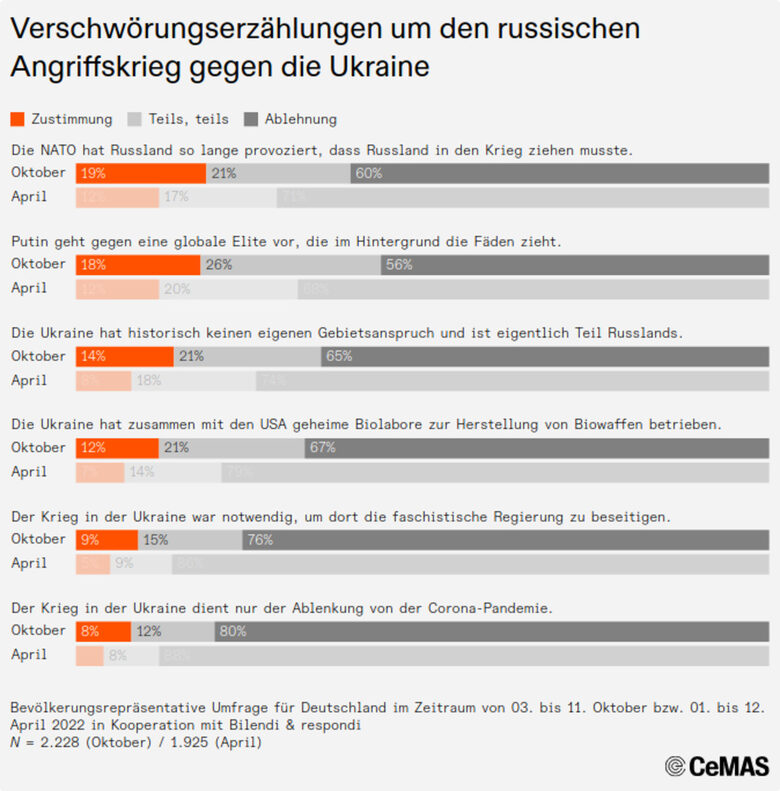 The statements in this graph with which respondents can choose to fully or partially agree or disagree in the order in which they appear on the graph:

- NATO provoked Russia for so long that Russia had to enter the war;

- Putin is going against a global elite that pulls the strings behind the scenes;

- Ukraine has never had its own territorial claims historically and is actually part of Russia;

- Ukraine operated, together with the US, secret biolaboratories for the production of biological weapons;

- the war in Ukraine was necessary to remove the fascist government;

- the war in Ukraine only serves to divert attention from the coronavirus pandemic.

It is important, according to the authors, to take into account the share of doubters. It corresponds to the Russian disinformation strategy towards Europe during the war.

Yet the explanation for these numbers cannot be limited to misinformation alone.

What is the reason?

The authors also highlight that people in East Germany are more likely than people in the West to believe in pro-Russian conspiracy theories about the war in Ukraine. Approximately every third respondent in East Germany is completely convinced of statements justifying Russia's aggressive war with NATO provocations, the German magazine "Spiegel" writes on the subject.

The narrative of fascists ruling Ukraine has been "constructed by Russia for years," the study noted. It states that "Russian disinformation campaigns are aimed at creating general insecurity and 'sowing doubt among the population'. Their aim is to 'shake confidence in democracy in favor of their own goals.'

However, researchers report that these sentiments were spreading even before the start of the war among the COVID-19 deniers who have become the backbone of many of the pro-Russian rallies this fall in East Germany.

At the same time, Alexei Yusupov, director of the Russian programs of Friedrich Ebert, points out in a conversation with "Meduza", the explanation may be slightly different: the channels for its distribution are largely closed. According to him, the data point rather to a return to the pre-war discourse; in Germany, the version that NATO was provoking Russia was widespread even before the invasion, and many among its population and elite considered it a "normal" position, Yusupov continues.

According to him, it is also necessary to take into account the skeptical attitude - traditionally in recent decades - of Germans towards NATO: as of 2019, only 51% of Germans believe that membership brings them something good. Only 30 percent of them see NATO as a "force for good" in the world. The effect of rallying Germans around the war is waning and questions are coming about the cost of the conflict. Something more:

“In German conversations about politics in the kitchen, the question always rings: In whose favor? And unlike April, we see that the losing countries in the war are many, Germany being one of them,” said Alexey Yusupov, political scientist

The fact that Germany feels increasingly dependent on decisions that are not accepted in Berlin is more important than Russian propaganda in shaping these attitudes, Yusupov believes.