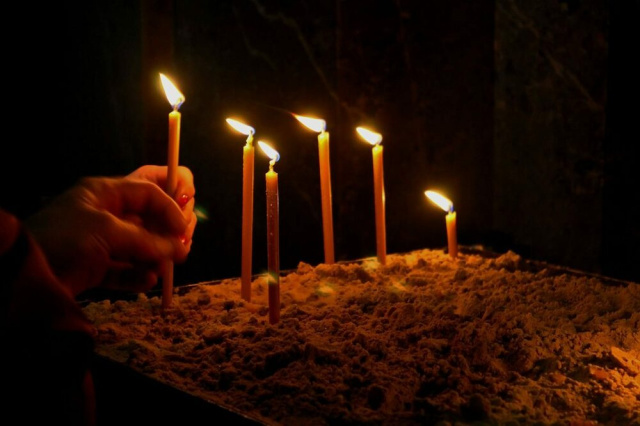 Today is Archangel All Soul’s Day. It is one of the three Saturday days in the Orthodox calendar that are set aside for a general prayerful remembrance of the deceased. It is called so because it is celebrated on the Saturday before Archangel's Day.

On All Soul’s Day (called in Bulgaria “Zadushnitsa”), a funeral liturgy and a general memorial service for all deceased Orthodox Christians are performed in the churches.

"Zadushnitsa means ‘for the soul’. In some parts of Bulgaria it is known as odushe, which is again for the souls. This is the commemoration that we do together as a congregation in all churches, by addressing our prayer to God - may the souls of all Orthodox Christians who have died since time immemorial rest in peace, to forgive them every willful and unwitting transgression and grant them eternal life. Amen."

On Zadushnitsa, the graves of the deceased are visited. Bread, boiled wheat, wine and flowers are brought. Acquaintances and strangers are given a small gift, most often food, to honor the memory of the deceased with the shortest prayer "God forgive!"

President Rumen Radev will pay tribute to the memory of those who died for Bulgaria on today's Archangel All Soul’s Day. The head of state will participate in the military ritual - memorial service, which is traditionally held in front of the Military Mausoleum-ossuary at the Central Sofia Cemetery.

Archangel Zadushnitsa is dedicated to the memory of Bulgarian servicemen who died in wars, in peacekeeping operations and in the performance of military duty in peacetime.

The funeral service at the Central Sofia Cemetery will be performed by His Eminence the Bishop of Belogradchik Polycarp in the presence of the President, the Minister of Defense, the Chief of Defense, senior officers of our armed forces, members of military patriotic unions.

Memorial services for Archangel's (male) All Soul’s Day will also be held in a number of Bulgarian cities in front of monuments to those who died in the wars, servicemen from the National Guard unit and the branches of the Bulgarian army, the Special Operations Forces and the National Military University "V. Levski".

Wreaths and flowers and military honors in memory of the dead will be traditionally laid by the Ministry of Defense at the Bulgarian military cemetery in Novo Selo, Strumishko, and in front of the officers' graves in the city cemetery in Strumica, Republic of North Macedonia.

The ritual in memory of the fallen Bulgarian soldiers has been held since 1924. The tradition was interrupted in 1946 and restored in 1992 by the Ministry of Defense at the suggestion of the Union of War Disabled and War Injured.