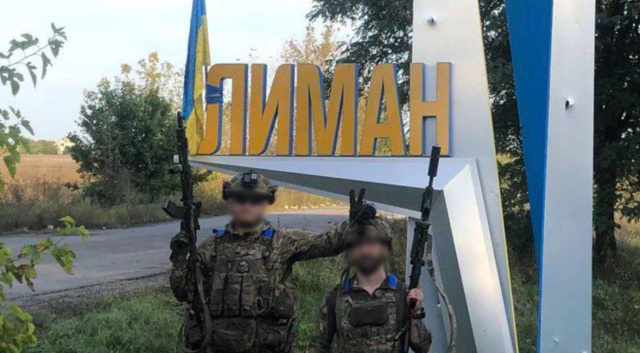 The Russian Ministry of Defense has announced that it is withdrawing its troops from the city of Lyman in Ukraine's Donetsk region.

An official announcement by the ministry states that "due to the danger of encirclement, the allied troops left Krasniy Lyman and withdrew to more advantageous positions."

The military department adds that 200 Ukrainian servicemen, five tanks and nine infantry fighting vehicles were destroyed in the past 24 hours.

However, the message also says, the Ukrainian troops have created a great superiority in manpower and equipment in the area and have continued their advance.

On Friday, the leader of the so-called Donetsk People's Republic, Denis Pushilin, admitted from Moscow, where he signed a treaty on the accession of the republic to Russia, that the situation in Lyman is very difficult and that the allied troops are holding the front with their last strength.

Defense Minister Sergei Shoigu earlier assured that Russia's ongoing military mobilization would not affect women and students at both public and private state-accredited universities. He added that by order of the president, the military department has prepared the relevant amendments to the mobilization decree.

The President of Ukraine, Volodymyr Zelensky, said that the Ukrainian forces will recapture more areas in the eastern Donbas region from Russia. Moscow has withdrawn its troops from the strategic Ukrainian city of Lyman, seen as a significant setback for its campaign in the east.

"Russia staged a farce in Donbas. An absolute farce, which they wanted to present for a referendum. They did some shows, led people with automatic weapons to their homes, carried papers, the propagandists filmed all this in the parts of Donbas that they control, and now there is the Ukrainian flag. In a week, Ukrainian flags have increased, and soon they will be even more. Ukraine will regain its own - both in the east and in the south."

Ukrainian Deputy Defense Minister Hanna Malyar also said the situation in Lyman remains complex. She urged people not to post anything on social media, stressing that the military will report when there is news.

Earlier, the Russian Ministry of Defense announced that it was withdrawing its troops from Lyman because of the "danger of encircling allied troops". Recapturing Lyman is of strategic importance for Ukraine. The city was used as a logistics hub by Russia and could give Ukrainian troops access to more territory in the Donetsk and Luhansk regions.

Meanwhile, International Atomic Energy Agency Director General Rafael Grossi said he expects to travel to Kyiv and Moscow next week. The visit is related to ongoing efforts to create a security zone around the Zaporizhzhia nuclear power plant.

Grossi also commented on the detention of the director of the facility, Igor Murashov, by the Russian authorities, calling it a cause for concern. According to the Russian side, Murashov was detained temporarily for questioning.

Gazprom has halted natural gas supplies to Italy amid a regulatory dispute in Austria.

The disruption appears to be aimed only at Italy, which receives supplies from Gazprom through a pipeline running through Austria. Vienna-based OMV was allocated larger quantities of Russian gas, said Andreas Rinoffner, a spokesman for OMV, which imports Russian gas to Austria.

Although Italy has begun to cut itself off from Russian gas, the suspension of supplies highlights the energy vulnerability of European countries to Russia, Bloomberg reported.

Gazprom issued a statement saying it had halted supplies to Italy because the Austrian operator refused to confirm "transport nominations" following regulatory changes introduced in Austria at the end of September.

Austria's energy ministry said Gazprom had not signed the contract changes that reflected the technical corrections to the rules. These are usually done at the beginning of each year. "Gazprom has known about the changes for months," Austrian regulator E-Control said on Twitter.

Disputes over contractual clauses and regulations accompany the collapse of economic ties between Russia and the countries of Europe.

Italy used to rely on Russia for about 40% of its gas imports, but after the invasion in February it aggressively reduced that dependence. Italy has already procured enough alternative gas supplies from North Africa to offset a potential shortfall this winter, people familiar with the matter told Bloomberg.

According to them, the expected supplies from Algeria and Egypt will be able to cover the remaining supplies that Italy still receives from Russia.

After the shutdown of Nord Stream, there is now only one major gas pipeline that delivers natural gas directly to Europe. And this route, which passes through Ukraine, looks increasingly vulnerable. Some supplies through this pipeline have already been cut off by the war and it could be the next to be shut down.

Gazprom also reduced the daily quantities of natural gas to Moldova via Ukraine and blamed Ukraine for this reduction.

US and UK suspected of Nord Stream gas leak

The retired colonel, former senior adviser to the head of the Pentagon, Douglas Macgregor, on the air of the YouTube channel Judging Freedom, named the possible culprits of the incidents of the Russian pipelines "Nord Stream" and "Nord Stream-2". According to him, the attack may have been carried out by the United States or Great Britain.

"We need to see which state structures have had the opportunity to do this. And that's the Royal Navy, the United States Navy. I think that's pretty obvious," Macgregor said.

As the colonel explained, it was necessary to use hundreds of kilograms of TNT to damage the unusually strong pipes of the gas pipeline. Macgregor also pointed to the absurdity of the accusations against Russia. He recalled Moscow's high income from energy exports. The destruction of the Nord Streams is also unprofitable for Germany, which was interested in the inflow of Russian gas, he pointed out.

On September 26, Denmark and Sweden announced in a letter to the UN that three sections of the Nord Stream 1 and Nord Stream 2 gas pipelines had been damaged. German security services assumed that both tubes would no longer be usable and would be shut down permanently.

"According to preliminary information, the enemy hit the regional center and the suburbs with four S-300 missiles. As a result of the attack, industrial infrastructure was destroyed," noted the head of the RMA.

“There are no victims”, he added.

Citizens were urged to observe safety measures and not to ignore air raid signals.

There is a risk of repeated attacks.

"The occupier is suffering losses on the front, the only thing he can do is destroy civilian objects," wrote the head of the SOA and added that "the enemy is doomed."

Zaporizhzhia NPP is the most powerful nuclear power plant in Europe and the 5th in the world. It is located next to the town of Energodar, on the banks of the Kakhov Reservoir on the Dnieper River. On Friday, the director of the Zaporizhzhia NPP, Igor Murashov, was detained by Russian units, Ukrainian state nuclear regulator Energoatom announced. Murashov traveled from the headquarters to the nearby town of Energodar around 4 p.m., was blindfolded and is believed to have been taken to prison in Energodar, the BBC reports.