US Raids Home of "Dr. Germ" 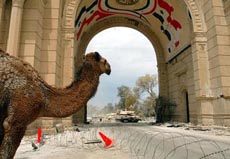 The raid on the microbiologist, nicknamed "Dr. Germ", was backed by about 40 Marines with machine guns.

Troops brought out boxes of documents and three men with their hands up.

The whereabouts of Rahib Taha, in charge of a laboratory that weaponized anthrax, weren't immediately known.

At the Baghdad International Fairgrounds, hundreds of looters helped themselves to sacks of sugar, tea and flour that had been stored in warehouses before the war.