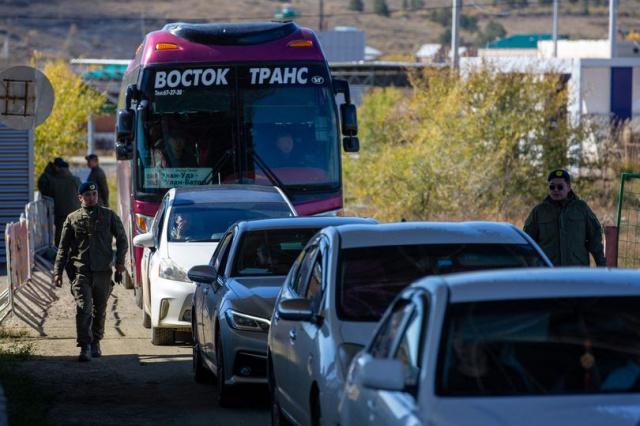 At least 261,000 people have left Russia in the first few days since Russia announced partial military mobilization. To stop the process, the Russian services want to close the border, but in the Kremlin, discussions continue.

This is indicated by publications of "Novaya Gazeta Europe" and "Meduza" from the last hours. According to the first publication, which cited sources in the presidential administration, the shutdown would only take effect for Russians of mobilization age (this goes far beyond the previously announced criteria for partial mobilization - something Kremlin allies have also noted).

However, President Vladimir Putin has not yet scheduled a discussion on the issue. Such conversations are still taking place in the presidential administration, and representatives of the Federal Security Service (FSB counter-intelligence, the former KGB) toured the offices in the Kremlin yesterday, September 25.

A source in the presidency also doubts the reliability of the data on 261,000 people who left (because the FSB does not work "so quickly"). At the same time, "the atmosphere in the president's administration is such that the hawks and the Ministry of Defense can convince Putin to ban the exit until it is too late." Other media reports have also mentioned that Putin actually went on vacation.

The ambiguous discussions are also illustrated by the publication of the electronic edition "Meduza", according to whose sources, the ban may be announced as early as September 28 (Wednesday, the day after the end of the "referendums" in the territories occupied by Russia).

Another interlocutor of the publication, like the previous one close to the presidential administration, also confirms September 28 as the most likely date - because of the "referendums". Departure will still be possible according to this information: through something like "exit visas", with permission from the military commissariat.

In theory, no one can be turned back from the border if they have not received a summons. However, human rights activists reported cases of Russians being banned from leaving the country even during the holidays. The head of "Agora" Pavel Chikov published photos with two refusals issued at the border with Kazakhstan. The cited documents indicate that the decision to issue a refusal rested with the military commissariats. Such photos are distributed as pulled from private groups; at least five such cases are reported.

Unconfirmed information appeared in the media that a similar step is also being prepared on the Georgian border, but on the initiative of Tbilisi, not Moscow.

Discontent among some Russians continues to escalate, especially in regions far from Moscow. In Dagestan yesterday, demonstrators blocked the border, there was shooting in the air. There was also a protest in the center of the Dagestan capital, Makhachkala, with nearly 100 detainees, for the suppression of which the Russian Guard was used.

In Irkutsk, a man, probably subject to mobilization, opened fire on a military commissariat. According to the initial data, it was known that during the attack of the shooter born in 1997, that a military commissar or the head of the draft commission was injured.