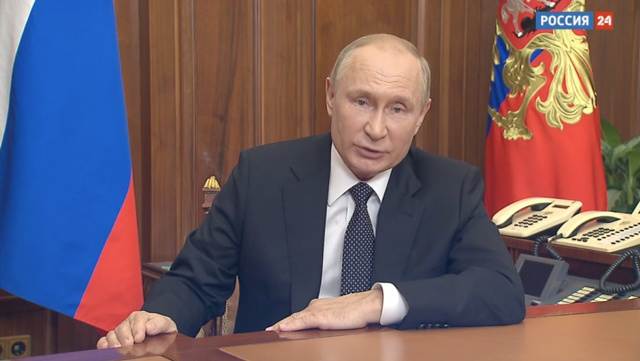 "The West wants to destroy our country, does not want peace between Ukraine and Russia and is waging nuclear blackmail against us, our goal is to liberate Donbas," said the Russian leader.

He addressed the West, saying that all resources will be used to protect the Russian people, and that Russia has many weapons with which to respond, and that this is "not a bluff."

"If the territorial integrity of our country is threatened, we will use all available means to protect our people, and this is not a bluff," Putin also said in a video address to the nation. He has already signed the necessary decree for the partial mobilization and set the goal of liberating the eastern Donbas region of Ukraine.

According to Putin, the Ukrainian people have been turned into cannon fodder. He also expressed support for the referendums announced yesterday on joining Russia in the Ukrainian regions of Luhansk, Donetsk, Kherson and Zaporizhzhia.

This was followed by a statement from Russian Defense Minister Sergei Shoigu, who said Russian forces in Ukraine were fighting the West.

He explained that partial mobilization would apply to those with previous military experience, and specified that no military servicemen or students would be recruited.

According to Shoigu, 300,000 people will be called up, or one percent of the 25 million people who could be mobilized.

The first reactions of Kyiv's Western allies also appeared - according to British Foreign Secretary Gillian Keegan, what Putin said was a worrying escalation of the conflict, and that his threats should be taken seriously.

According to the Minister of Economy of Germany, the partial mobilization in Russia is a bad and wrong development of events.