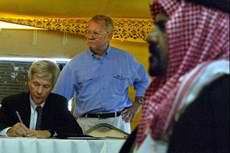 Retired US general Jay Garner (C) and Ryan Crocker (L), deputy assistant to the US Secretary of State for Near Eastern Affairs, attend a US-sponsored Iraqi citizens' meeting to discuss a post-war Iraq 15 April 2003 at the Tallil air base. Photo by AP
Returned Iraqi exiles and representatives of Iraq's main ethnic groups agreed to meet again in 10 days, after a US-brokered meeting to start shaping a future government of Iraq took place near Ur, one of the most ancient cities in the world, BBC reported.

White House envoy Zalmay Khalilzad said the US has "absolutely no interest in ruling Iraq".

The meeting marked the first attempt at setting up a new civil authority since the toppling of Saddam Hussein's regime.

But one of the country's main Shia groups, the Iranian-based Supreme Council for the Islamic Revolution in Iraq (SCIRI), refused to attend the meeting in protest at the US role.

The United Nations was not represented at the meeting either.