North Macedonia’s President: Only Macedonians with Low Self-Esteem are Afraid of "Bulgarianization" 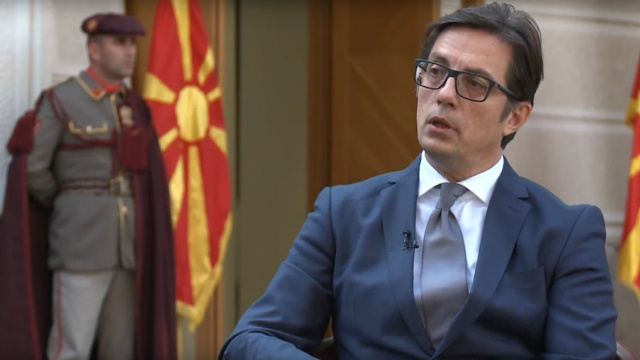 “The threat of ‘Bulgarianization’ is a fiction of the opposition with the aim of instilling fear among Macedonians”, believes the president of our southwestern neighbor, Stevo Pendarovski. He announced this in an interview with the local publication "Trilling".

"Only those Macedonians who have a weak national self-esteem are afraid of Bulgarianization. It is completely insulting to the Macedonian nation to claim that a protocol, a contract or the mechanisms for European integration, that you and I can become Bulgarians. This is deception, because there is no danger for us – that at the end of the European processes, we will become Bulgarians," the president notes.

“And the inclusion of Bulgarians in the Macedonian constitution is actually a direct confirmation that Bulgarians and Macedonians are something different”, he notes. The question is whether this is the last Bulgarian request, emphasizes Pendarovski.

The Macedonian president also announced that he is coming to Bulgaria on October 1.

"I am going to Sofia at the invitation of President Rumen Radev. I had 4 telephone conversations with him on the subject of electricity import. During the visit, the interconnector between Bulgaria and Greece will be opened and several presidents and prime ministers from the region will be present at this event. This will be an occasion to demonstrate that they should not behave in the future as enemies, but on the contrary as good neighbors who help each other in difficulties."

The opposition in RNM, in the form of VMRO-DPMNE, declared for a referendum to cancel the Good Neighbor Agreement between our two countries at the beginning of the month. However, Parliament Speaker Talat Xhaferi rejected the request as unconstitutional - like Bulgaria, international treaties in the RNM cannot be decided through a referendum.