Day 193 of the Invasion of Ukraine: Russian Artillery Fire from the Zaporizhzhia NPP 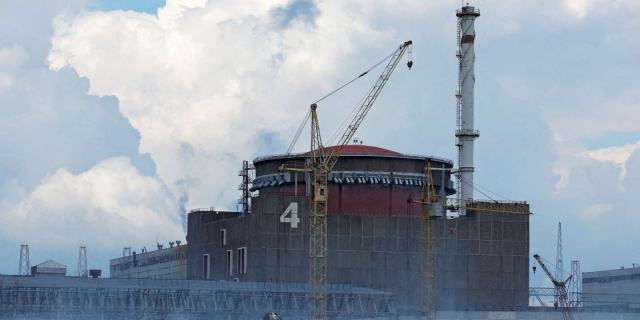 Russian forces continue to suffer from morale and discipline problems in Ukraine. In addition to combat fatigue and heavy casualties, one of the main complaints of Russian soldiers sent to the front is likely to continue to be problems with their pay, according to the regular daily briefing of British military intelligence.

In the Russian army, troop incomes consist of a modest basic salary augmented by a complex variety of bonuses and allowances. It is very likely that there will be significant problems in Ukraine with the non-payment of significant combat bonuses to Russian soldiers. This is likely due to an inefficient military bureaucracy, the unusual legal status of the "special military operation" that Russia calls it, and at least some apparent corruption among commanders, the UK MoD brief also said.

The Russian military has consistently failed to provide basic rights to troops stationed in Ukraine, including proper uniforms, weapons and rations, as well as pay. According to British intelligence, this almost certainly contributed to the continued fragile morale of much of the Russian forces stationed in Ukraine.

Find out more about the UK government's response: https://t.co/d8BWWLuqCF

Video proves: Russia shoots with artillery from the Zaporizhzhia NPP

Evidence has appeared on the Internet that the Russian invaders are using artillery from the territory of the Zaporizhzhia Nuclear Power Plant.

A video showing just that was posted by The Insider.

The footage was shot on the night of September 2-3. The footage shows rocket launchers located in close proximity to one of the power units of the plant.

The Russians themselves have repeatedly stated that they did not fire from the territory of the plant. At the same time, Washington confirmed that Russia is using the NPP as a "shield" for shelling civilian objects and positions of the Ukrainian Armed Forces.

Videos have appeared on the web showing military equipment of the occupiers placed in close proximity to the reactors, endangering the operation of Europe's largest nuclear facility.

At the request of the Ukrainian government, the IAEA formed a mission to visit the occupied power plant. 14 international experts participated in it.

Energoatom stated that the occupiers made every effort to prevent the members of the IAEA mission from getting to know the real situation at the Zaporizhzhia nuclear power plant.

ISW: Kremlin silences military bloggers who write about the problems in Ukraine

The immediate goal of the Ukrainian counteroffensive remains the strikes on Russian logistics centers in the occupied territories. This is according to a new report by the American Institute for the Study of War (ISW).

A day ago, the adviser in the presidential administration Oleksiy Arestovich told the WSJ that the current goal of Ukrainian forces in the south of the country is "systematic suppression of Putin's army", and that "Ukrainian forces are slowly and systematically destroying Russia's operational logistics system through high-precision artillery hits".

Arestovich's statement reiterated ISW analysts' assessment that the ongoing counteroffensive is unlikely to lead to immediate success and that Ukrainian forces are trying to disable key logistical nodes supporting the enemy group in the south of the country. This will ultimately undermine Russia's military potential.

Ukrainian forces may also launch local attacks along the contact line in the western part of Zaporizhzhia Oblast to prevent Russian forces from deploying.

The Kremlin may have increased its efforts to encourage self-censorship among Russian military bloggers and military correspondents covering the war in Ukraine, the Institute for the Study of War said.

Semyon Pegov, a prominent Russian military propaganda correspondent who works for the WarGonzo Telegram channel, was detained and then released in Moscow, analysts said.

According to WarGonzo, Pegov was arrested for threatening a hotel receptionist in a drunken state.

"Pegov is an experienced military journalist, and WarGonzo has extensive ties to the Russian military and access to Russian military operations in the Donbas in 2014, in Syria in 2015, and in Ukraine in 2022.", the ISW report noted.

In July, the Institute reported that Russian authorities are trying to encourage self-censorship among bloggers who undermine the Kremlin's efforts to present the war with Ukraine as "won." Some military bloggers openly report that Russian troops in Ukraine are not doing a good job.

"The Kremlin has not yet taken action to detain bloggers for their reporting. Pegov's detention - if related to his reporting in Ukraine - would be a significant step in Russia's efforts to control the Russian information space," ISW stressed.

“I'm old, I'm super old.” Ramzan Kadyrov has announced that he is stepping down from the presidency of Chechnya

Chechen leader Ramzan Kadyrov has declared that he is too old and announced his intention to step down as the head of the Chechen Republic. In a video message from his favorite phone, the president of Chechnya did not set specific deadlines in which he plans to realize his wish. Kadyrov said he was the longest-serving republican leader and said he had to leave in time before he was ousted. Most likely, Kadyrov is not sincere, and behind his so-called withdrawal, he has other plans for himself.

According to political scientist Sergey Kiselyov, there are two possible versions of Ramzan Kadyrov's resignation statement. One is the "response" of the federal center, Moscow, which gives Ramzan Akhmatovich no more powers than to control 1/85 of the territory of the Russian Federation. At the same time, we must be aware that under no circumstances will he leave his native Chechnya without his personal control.

The second possible option is Kadyrov's future new engagements. Kiselov admits that Kadyrov may soon become a key figure in "special operation Z" - commanding the front. The version is also spreading that he can become the governor-general of the new territories, the occupied regions of Ukraine.

Political scientist and head of the research center "Minchenko Consulting" Yevgeny Minchenko suggested that the Chechen president may be appointed as a special representative of the president of Russia for interaction with Islamic states. Minchenko points to his adviser Ruslan Edelgeriev as a possible successor to Kadyrov as president of Chechnya.

According to "Meduza", Kadyrov can head "Rosgvardia".

❗️Don-Don Kadyrov said he is old and about to leave

"We have a proverb among Caucasians, Chechens. No matter how respected, long-awaited a guest is, if he leaves on time, then it is even more pleasant. I think that my time has also come. Until they kicked me out," said Kadyrov. pic.twitter.com/DT842FHKKA

“As-Salaam-Alaikum. I welcome everyone. This is me with my phone again. Here's how it works now. Now I realized that I am the biggest long-timer among all the heads of subjects (republics in the Russian Federation), in the first place. It has been 15 years since I led the republic. We Caucasians - Chechens have a proverb: No matter how much a guest is respected, long-awaited if he leaves on time, it is even more pleasant. That's why I think my time has come too, until I'm kicked out. So, such things, it seems to me that I am old now, I was once young, the most inexperienced, and now I have remained so inexperienced, but the youth has gone somewhere I do not know. Such things. We have already started thinking about it. I'll try to leave on time.As-Salam-Alaikum, Ahmat strength!”

On the day that Kadyrov announced that he was "going away", it became clear that a new 78th motorized rifle regiment was formed in Grozny, which was given the name "Akhmat Hadji Kadyrov". The regiment is part of the 42nd Motorized Rifle Division and, as of today, its servicemen can begin full-fledged military service, Kadyrov himself wrote in Telegram.

Zelensky: "Russia is trying to destroy normal life in Europe"

"These days, Russia is trying to increase the energy pressure on Europe even more. The gas supply through Nord Stream-1 has been completely stopped," he said during his regular evening video address. "Russia is trying to destroy the life of ordinary Europeans in all the countries of the continent."

According to him, the goal is to weaken and intimidate European countries. Besides tanks and missiles, Moscow also uses gas as a weapon. This winter, Russia is preparing a "decisive strike" in the energy sector, the Ukrainian president has warned, pointing out that only stronger unity can help in the fight against it.

He added that the Europeans should achieve better coordination of their countermeasures and provide more assistance to each other. In addition, according to the Ukrainian head of state, the pressure against Russia should be increased in order to limit its profits from oil and gas sales.

Zelensky also commented on yesterday's incident in the Ukrainian city of Chernihiv, in which four children and one adult were injured when a 10-year-old boy fired a grenade launcher during a weapons exhibition in front of the city's historical museum.

According to information published on the website of the General Prosecutor's Office of Ukraine, the injured children are aged between two and twelve years.

In his statement last night, Zelensky called the incident "unacceptable" and promised that the culprits would be punished.