Bulgaria: The Floods Continue, Villages are Separated from the World, People are Being Evacuated 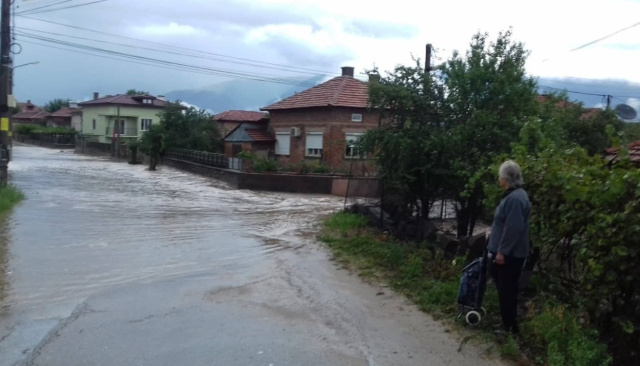 There is no information about dead or injured people in the flood in Bogdan and Karavelovo. Such signals are being received but at the moment they have not been confirmed. This is what Commissioner Nikolay Nikolov, director of the General Directorate of Fire Safety and Protection of the Population, told BNT.

He stated that the situation in Bogdan and Karavelovo continues to be difficult. The good news is that the water level in Bogdan has dropped almost a meter.

There are people in distress - these are three people in Ribarnitsi near the village of Moskovets. The instructions are to go to the upper floors of the houses to wait for the rescuers. “We are doing everything possible”, said Commissioner Nikolov.

If the weather permits, a helicopter will fly to evacuate 5-6 people, including a pregnant woman. Hundreds of people work on site - volunteers, firefighters, military, police, rescuers. Everything possible has been mobilized to assist the people, said Commissioner Nikolov. 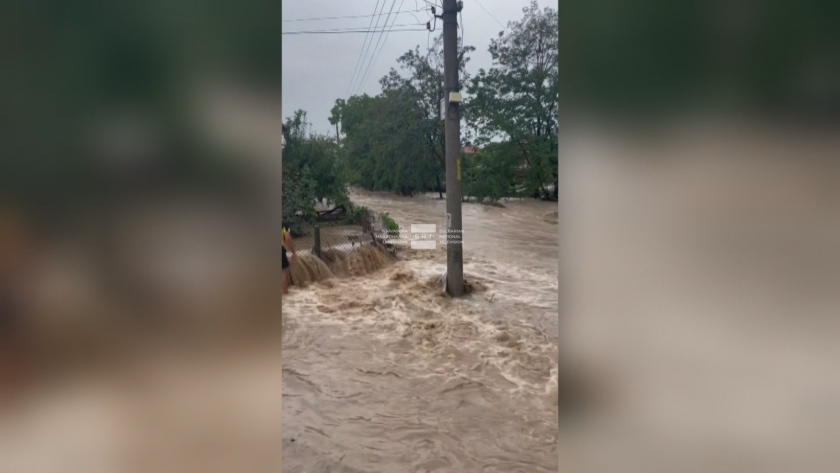 According to him, the floods were caused by the heavy rains. He explained that last night over Klisura the rain was 191 liters per square meter. Around noon, a powerful cumulus-rain cloud, a so-called supercell, developed over Mount Bogdan, which additionally poured rain.

"Everything in the mountain in Sredna Gora up to Bogdan peak has been destroyed. This was one of our backup routes to go around through Belokamene, Srednogorets hut, to go to Bogdan, but it's hell up there - there are no roads. These are part of the steep waters that come from Skaladere," said Commissioner Nikolov. 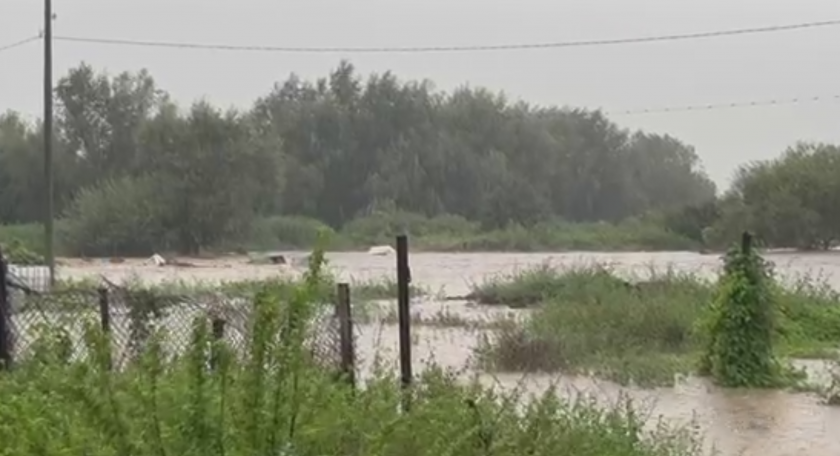 Because of the destroyed bridges, pontoon bridges are currently being prepared together with the military, which will be used to evacuate people, as well as BNT, BNR teams, which are also in Bogdan. Dozens of boats are on their way to the site, but they cannot be used immediately because of the high waters, Commissioner Nikolov said.

He also added that they are in touch with the mayors, and the mayor of the Kabaivanov municipality is in Bogdan, together with the head of the fire department.

The situation is also difficult in other Karlovo villages. The Sub-Balkan road is impassable, the railway line is also flooded with muddy water and silt. There are dozens of flooded houses. The water level is between 1.5 and 2 meters.

The team of the Bulgarian National Television is blocked between the villages of Karavelovo and Bogdan and is together with the teams of the fire department. It continues to rain very heavily, there is no electricity, communication is difficult. Food and water will be needed to help people. 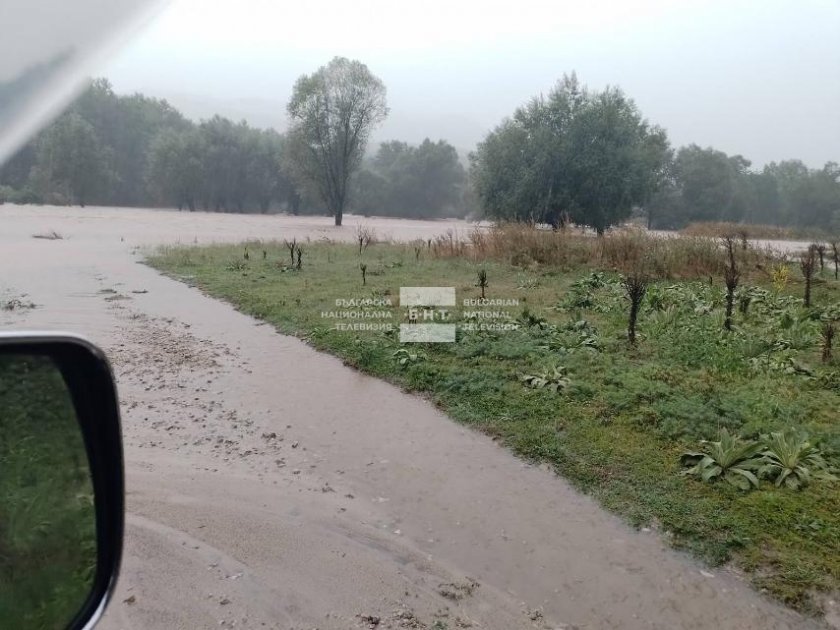 The situation in Rozino and Stoletovo is difficult after the heavy rains, there is a person in distress

The situation is also difficult in the villages of Rozino and Stoletovo in Karlovo region after the heavy rains.

In the village of Stoletovo, the river has gone out of its banks, mayor Miroslav Kolev told BNT. There is a man in distress in a house which is situated by the local dam.

He is the owner of the dam, who is on the second floor of the house because the first floor is already flooded with water. For the time being, the people of the village cannot reach him. They are in contact with the commander of the 61st Stryama Brigade, but due to bad weather conditions, the helicopter, which is based in Graf Ignatievo, cannot take off. There is currently no electricity in the village. 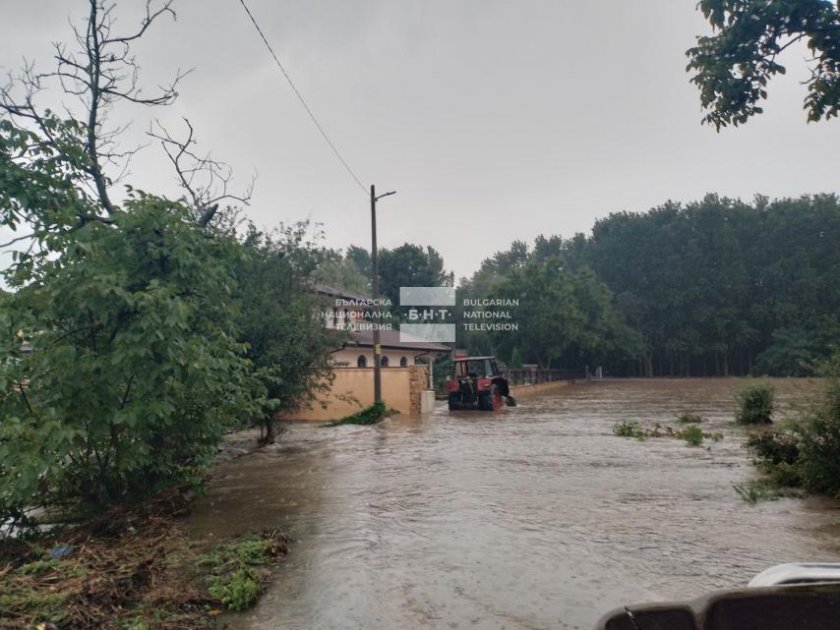 The Stryama River has flooded the cannery and all the fields, there are flooded houses, partially from overflowing septic tanks but the houses are far from the incoming river. According to the mayor, one of the causes of the flood is the uncleaned river bed.

In the village of Rozino, it has been raining continuously since two o'clock at night, said the mayor Ali Kyuchuk.

The main road is flooded and the settlement can only be entered by a high-terrain vehicle. The kindergarten and two houses were flooded. Two roads above the village were partially destroyed.

The river and ravines overflow. There are downed power poles that have been undermined by the water. There is no electricity in Rozino anymore, the water supply has also been stopped.

There are no people in distress at the moment. 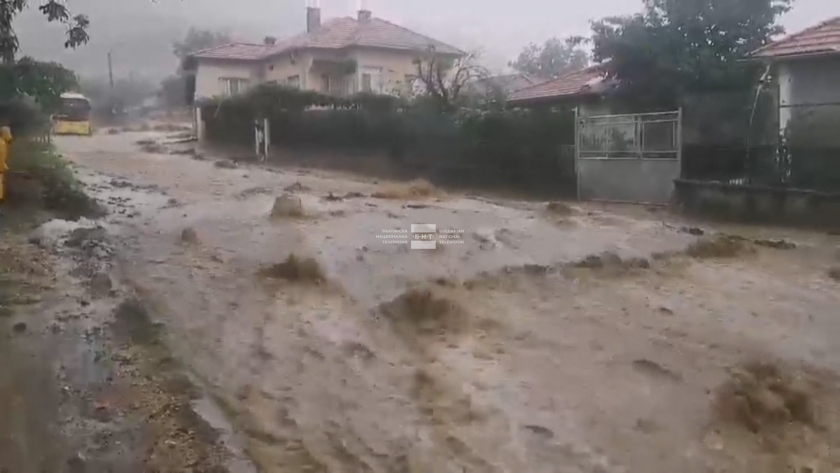 Heavy rains and flooded streets in Koprivshtitsa as well

Heavy rains also in Koprivshtitsa - in some places the banks of the “Byala” river have overflowed and flooded streets.

The river has almost overflowed at the bridge "Prvata Pushka" and completely breached at "April 20" square. Byala river is a tributary of the “Stryama” river, which flooded the villages of Bogdan and Rozinovo due to a broken dam. 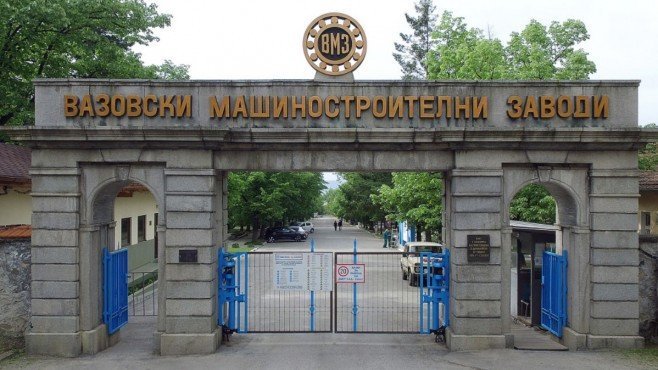 VMZ-Sopot stopped operations due to the heavy rains, there are flooded premises

As a result of the heavy rains that night, VMZ-Sopot has stopped its production process, reports the Ministry of Economy.

"Vazovski Machine Building Works" (VMZ) is a Bulgarian state-owned enterprise for the production of ammunition with its headquarters in Sopot.

There are flooded warehouses and production workshops. Electricity has been turned off in the production area in Sopot to prevent an accident.