Bulgarian Interior Minister: The Smugglers have Declared War - We will Respond with All our Might 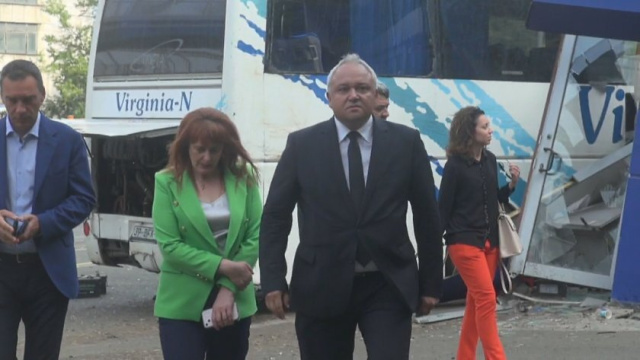 “The smugglers and traffickers have declared war on the Bulgarian state and it will respond with all its might. I will do my best to prevent this incident from happening again and to end these actions that have become more frequent. Now we are increasing the intensity and we’re including the Ministry of Defense to help us.”

This was stated by the acting interior minister Ivan Demerdzhiev, who arrived in Burgas, where two policemen died after a bus with migrants crashed.

Demerdzhiev assured that the necessary procedural and investigative actions are being carried out.

This crime will be investigated, said the acting Deputy Prime Minister and Interior Minister. He reported that there were detainees. According to him, there is another foreign citizen who is wanted.

Demerdzhiev said that in the coming days there will be actions that have not been taken so far. Border control will be strengthened. Demerdzhiev also said that there are a lot of forces at the border, which must deter migration pressure.

We are short on strength, but we will use everything to solve the problem. We are working on suspicions that there are insiders involved, from the MIA system, Demerdzhiev also said

The Minister of the Interior did not confirm at this stage the information that the bus had changed registration numbers.

Meanwhile, the mayor of Burgas announced that tomorrow, August 26, will be declared a day of mourning.

We remind you that minutes before 5 o'clock today, at the "Trapezitsa" intersection, which is one of the busiest intersections in the seaside city, the serious incident took place in which two police officers lost their lives.

There were nearly 50 migrants of foreign origin in the bus - men, women and children, whose identities have not yet been established. The driver did not comply with a signal issued with a stop baton by law enforcement officers. A chase began. The police patrol tried to block the way of the bus driver, who lost control and swept both the police car and two pavilions.Why I chose Bulgaria