Day 177 of the Invasion of Ukraine: New Powerful Explosions in Crimea, Russia switches to the Yuan 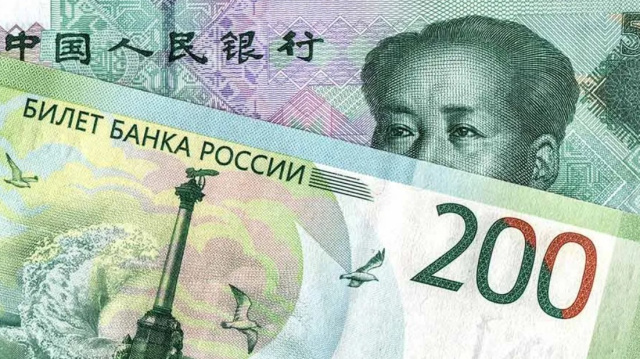 Powerful explosions were heard in Crimea last evening. Residents of Sevastopol uploaded videos on social networks showing flames and explosions. According to media in Ukraine, the "Belbek" air force base not far from the city was attacked.

Russia has not reported an attack. The state agency cited a local administrator who wrote that a drone had been eliminated. No damage and no injuries.

If the information about the attack on the military base is confirmed, it will be another attack on an important site in Crimea.

Ukraine has equivocally deflected questions about whether it was behind the attacks in the past 10 days. It is not entirely clear how exactly they are carried out, if they are the work of the Ukrainians. The blasts are deep inside Russian-controlled territory.

Also last night, residents of two villages in southern Russia near the border with Ukraine were evacuated after a fire broke out in an ammunition warehouse, Reuters reported. No one was injured in the incident, said Vyacheslav Gladkov, regional governor of the Belgorod Region.

The causes of the fire near the villages of Timonovo and Soloti, 15 kilometers from Ukraine, are being investigated. No further details have been released.

A video was posted on a popular Ukrainian news site showing a large plume of smoke rising from the base. Reuters cannot yet confirm whether the video is authentic.

Gladkov in previous months blamed Ukrainian forces for a series of explosions in and near Belgorod, which is 650 kilometers south of Moscow, Reuters recalls.

Russia switches to yuan for its international payments

Russia has risen sharply in the list of countries using yuan for international payments, Reuters reported. If you don't count China itself, only Hong Kong and Great Britain are ahead of Moscow, according to the published data.

Before the beginning of the Russian invasion of Ukraine in February, Russia did not appear at all on the list of countries using yuan for international payments. But due to the imposed financial sanctions, Russian banks and companies had to look for alternative routes to world markets, according to Reuters.

Hong Kong predictably topped the list with 73.8 percent of transactions in yuan, followed by the UK with 6.4 percent.

Russia's jump on the list supports claims that international financial sanctions are working to push the country out of the dollar-based global banking system. At the same time, however, fears are growing that this will only bring Moscow and Beijing closer together, who are already looking in the same political direction.

Meanwhile, Russia has developed its own SWIFT-like payment system, created special accounts for as-yet unsanctioned banks, and continues to sell important raw materials, such as oil, to many countries around the world, including China, India and Turkey.

The latest SWIFT data also show that the ruble is no longer among the top 20 global currencies used for international payments. In December 2021, it was in 16th place with 0.3 percent of the total volume. As expected, this ranking is topped by the US dollar, followed by the euro, the British pound and the Japanese yen. The yuan ranks fifth.

After holding trilateral talks with Ukrainian President Volodymyr Zelensky and Turkish President Recep Tayyip Erdogan in Ukraine's Lviv, the United Nations Secretary-General Antonio Guterres has called for a demilitarization of the area around the Zaporizhzhia nuclear power plant stating that any damage to the largest nuclear power station of Europe would be "suicide."

"In close contact with the International Atomic Energy Agency (IAEA), the UN Secretariat has assessed that we have in Ukraine the logistics and security capabilities to support any IAEA mission to the Zaporizhzhia Nuclear Power Plant from Kyiv, provided both Russia and Ukraine agree. Military equipment and personnel should be withdrawn from the plant. Further deployment of forces or equipment to the site must be avoided. The area needs to be demilitarized," the UN Chief said in a statement after the trilateral meeting in Ukraine. The Zaporizhzhia Nuclear Power Plant (NPP), located in southern Ukraine's Zaporizhzhia region has become a regular site for shelling in Ukraine and Moscow and Kyiv have each accused the other of striking the compound on Thursday and over the weekend.

Meanwhile, Guterres also discussed the investigation of the tragic incident in a detention facility in Olenivka that took place on 29 July.

He said, "What happened there is unacceptable. All prisoners of war are protected under International Humanitarian Law," adding that the International Committee of the Red Cross must have access to them wherever they are kept as he decided to establish a Fact-Finding mission and appointed General Carlos dos Santos Cruz of Brazil to lead this mission. He was commander of UN peacekeeping operations earlier.

Reiterating that the UN will continue to work to guarantee secure access to Olenivka, Guterres said Ukraine can count on the support of the United Nations to promote human rights, international law and the cause of peace.

The UN Chief and Zelensky signed the Black Sea Grain Initiative in Istanbul a few weeks ago, which was a landmark agreement as a solution to the global food crisis.

Guterres highlighted that 21 ships have departed from Ukrainian ports and 15 vessels have left Istanbul for Ukraine in less than a month to load up with grain and other food supplies.

Moreover, the first UN-chartered vessel carrying Ukrainian wheat is also on its way to responding to the needs of people suffering from the worst drought in the Horn of Africa in decades.

Russia and Ukraine signed separate agreements in Istanbul in July with Turkey and the United Nations to resume grain shipments to international markets via the Black Sea.

The agreement has ended a wartime standoff that had threatened food security in several countries and cleared the way for exporting tons of Ukrainian grains. The deal will enable Ukraine to export 22 million tons of grain and other agricultural products that have been stuck in Black Sea ports due to the war.