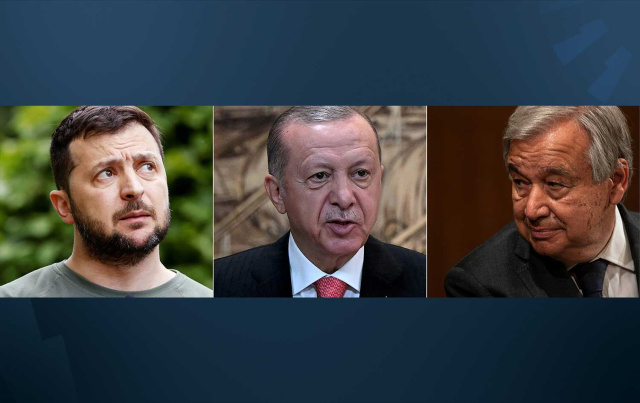 "At the invitation of President Volodymyr Zelensky[y], the secretary-general will be in Lviv on Thursday to attend a trilateral meeting with President Recep Tayyip Erdogan of Turkey and the Ukrainian leader," United Nations spokesman, Stephane Dujarric said on Tuesday, reported Al Jazeera. Guterres and Turkish President Recep Tayyip Erdogan will meet Zelensky in Ukraine on Thursday, the spokesman said, adding that the trio will visit the Black Sea port of Odesa Friday, where grain exports have resumed under an UN-brokered deal.

The first shipment of grain left the Ukrainian port of Odesa on August 1.

Russia and Ukraine signed separate agreements in Istanbul in July with Turkey and the United Nations to resume grain shipments to international markets via the Black Sea.

The agreement has ended a wartime standoff that had threatened food security in several countries and cleared the way for exporting tons of Ukrainian grains.

The deal will enable Ukraine to export 22 million tons of grain and other agricultural products that have been stuck in Black Sea ports due to the war.

The three leaders will reportedly discuss the grain shipment deal and attacks at the Zaporizhzhia nuclear power plant in southeastern Ukraine during their talks in Lviv.

The trio will also discuss "the need for a political solution to the conflict" between Russia and Ukraine, Dujarric said.

On July 22, Russia and Ukraine signed a landmark deal with the UN and Turkey on resuming grain shipments to ease a global food crisis which has come into existence due to the ongoing war between Russia and Ukraine.

Russia has so far been blocking maritime access to those ports, meaning that millions of tons of Ukrainian grain have not been exported to the many countries that rely on it.

Notably, Guterres will visit the Joint Coordination Centre in Istanbul, which is made up of Russian, Ukrainian, Turkish and UN officials overseeing the Black Sea exports of Ukraine grain and fertilizer.

Russia launched a "special military operation" in Ukraine on February 24, which the West has termed an unprovoked war. As a result of this, the Western countries have also imposed several crippling sanctions on Moscow.

Here you can read the highlights of events related to the war in Ukraine over the past 24 hours.