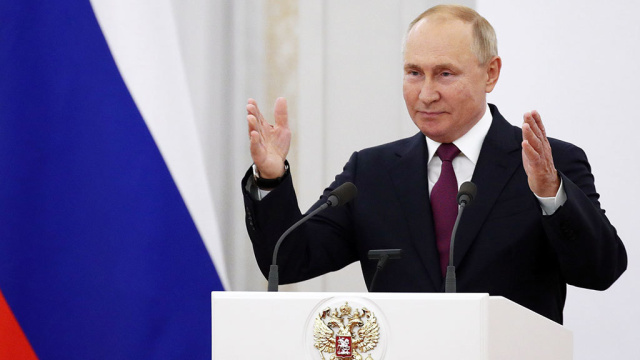 Russian President Vladimir Putin has accused the West of trying to expand a system similar to the North Atlantic Treaty Organization (NATO) into the Asia-Pacific region.

"The situation in Ukraine shows that the US seeks to prolong the conflict. And it acts in the same way, igniting the potential for conflict in Asia, Africa, Latin America," Putin said.

Speaking by video link on Tuesday to delegates at the 10th Moscow Conference on International Security, Putin also condemned what he described as "the West's collective efforts to destroy the European security system", the TASS news agency reported.

He also commented on what he called "Russia's special military operation in Ukraine", claiming that his country launched the intervention in "full compliance" with the Charter of the United Nations (UN).

Putin said the US was trying to "prolong" the conflict in Ukraine.

The Russian president also claimed that the West had prepared Ukraine to meet the fate of a "smoked meat".

Meanwhile, Russian Defense Minister Sergei Shoigu said at the same event that NATO had increased the number of troops in Eastern Europe and described the security situation as "worse than at the height of the Cold War".

According to him, Russia has no need to use nuclear weapons in Ukraine. During a speech at the Tenth Moscow Conference on International Security, Shoigu also claimed that the operations carried out by Ukrainian troops were organized by the United States and the United Kingdom.

And he expressed Putin's view that the West is trying to implement a NATO-like system in the Asia-Pacific region.

Meanwhile, Putin noted during the conference that US House Speaker Nancy Pelosi's visit to Taiwan was a "carefully planned provocation" and a "deliberate" move aimed at destabilizing the region.

"The American adventure in Taiwan is not just a trip of an individual irresponsible politician, but part of a purposeful, conscious strategy of the United States. It is a brazen demonstration of disrespect for the sovereignty of other countries," Putin emphasized.

In addition, the Russian leader warned that the US is trying to divert the attention of its citizens from "sharp problems" such as "declining living standards, unemployment, poverty and deindustrialization", using Moscow and Beijing, "which protect their point of view".

In his speech, Putin said that the United States interferes in the internal affairs of sovereign states and organizes provocations and protests to rule independent states.

"And all this is done with one goal - to maintain its dominance, the model that allows you to parasitize the whole world," he specified.

Putin also added that Russia would strengthen its armed forces "to protect its allies" and guarantee a democratic world.