Bulgaria: There are 34 Active Fires in the Country, the Situation in Most Places is Under Control 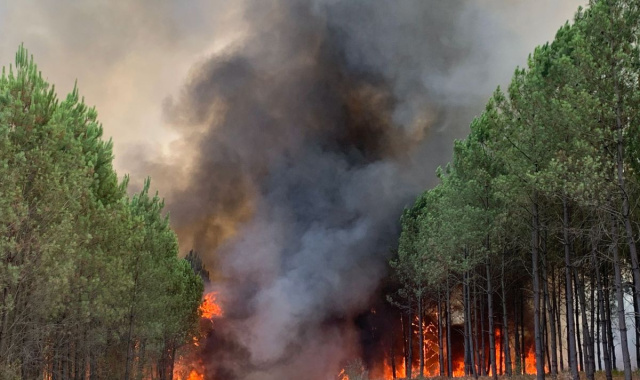 47 reports of fires were received at the National Operations Center. 34 are currently active fires. The situation is under control in most of the places, there are no critical points. Commissioner Nikolay Nikolov, director of the General Directorate "Fire Safety and Protection of the Population", stated this to journalists.

309 employees of the fire department, 42 policemen, almost 100 forest employees, about 50 volunteers, fire department equipment and the Ministry of Defense - a total of about 150 units - are fighting the fire.

The fires in Haskovo and Pastrovo have been contained. They are not restricted, but the situation is under control.

Attention is currently focused on the fire near the Pazardzhik village of Tsrancha, where a helicopter has been sent.

In the other regions, things are calm, Commissioner Nikolov said.

"The safety of the population is ensured. At the moment there is no direct threat. Fortunately, we have no dead or injured, except for the case in Burgas, but he did not die from the fire, but rather a massive heart attack," he said.

In Shumen, a house burned down in an accident, and the woman in it was injured.

Several houses, five of which were inhabited, were burnt down in the fires yesterday.

Commissioner Nikolov stated that the "Maritsa" highway will not be closed, they managed to control the situation. He stated, however, that a new one had started near this fire, but he hoped that things would be under control there as well.

Nikolov thanked the farmers who help with personal equipment, as well as the volunteers.

He said about the causes of the fires:

"For many of the fires there is clarity. These prerequisites of dry, windy weather, with high temperatures and human activity are a great reason for the fires to occur. We are primarily talking about negligence, arrogance and underestimating the situation."

He called for the activity of the field to be suspended for a few days because even the smallest spark is a potential danger for populated areas.