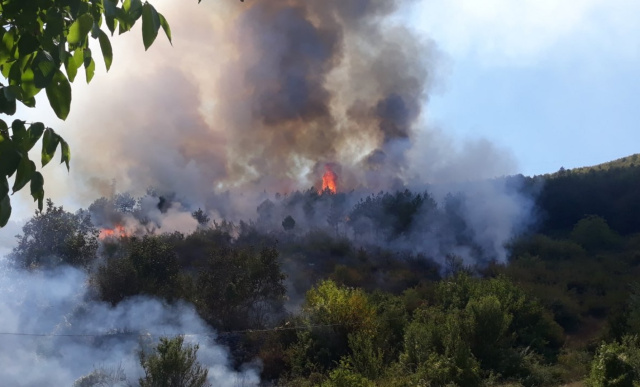 The state of emergency in Haskovsko remains in force due to the two fires in the territories of Harmanli and Lyubimets municipalities.

They have not yet been located due to the strong wind. A bulldozer was also called from the coal mining company “Mini Maritsa-Iztok”, which is already working in the field. This is what regional governor Minko Angelov said for BNR.

Uninhabited houses were burned. There is no danger to the population. The damage is yet to be assessed.

For the Bulgarian National Radio Angelov stated that the "Maritsa" highway will be closed to avoid road accidents:

"We will surely close the ‘Maritsa’ highway because the fire from Dositeevo and Yerushalimovo is going down."

The fires in Momkovo and Valche Pole have been brought under control.

It is assumed that the one fire around Biser-Belitsa-Cherna Mogila occurred near the train line and was due to a breakdown in one of the trains.

Extinguishing the fire near Elshitsa continues, it is expected to be brought under control

The fire near the Panagyurishte village of Elshitsa has not yet been brought under control. Until late last night, a helicopter at the "Krumovo" air base was dousing the fires ignited by the strong wind.

Over 70 firefighters, forest officials and volunteers were on duty throughout the night.

A military helicopter is expected to join the fight again this morning.

The situation is more serious in the northern front of the fire, where there are several active outbreaks. The strong wind hampered the work of the firefighters who, together with volunteers from all over the country, have been fighting the fire for the third day.

“I use the airwaves to thank all the volunteers who are here - from ‘Off-Road’ from Velingrad, from the voluntary services, formations, national ones, there are people from half of Bulgaria, which makes me happy, seeing how many young enthusiastic Bulgarians are ready to participate, to help”, said regional governor Trendafil Velichkov.

The fire is expected to be extinguished today.

Due to fires, a state of emergency has also been declared in the municipalities of Harmanli, Svilengrad and Lyubimets.