Former PM Kiril Petkov: We Fulfilled our Promises, We Did Not Violate our Principles 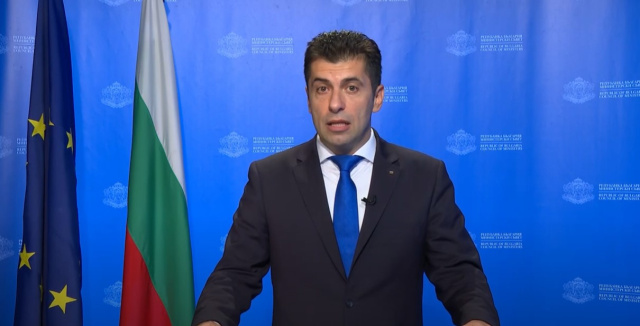 A video address by the resigned Prime Minister Kiril Petkov was distributed shortly before 12 o'clock by the press service of the Council of Ministers.

"We fulfilled our promises, we did not violate our principles in the name of the cause of Bulgaria" - Kiril Petkov sums up and lists the achievements of the government:

Today, our coalition government is handing over the running of the country to a caretaker cabinet.

The first thing I want to tell you at this moment is that there are no conditions for an apocalypse in Bulgaria. Politicians, lobbyists and stockbrokers take advantage of political instability to make you fear for the future. Don't let them! Their goal is to make you forget who turned Bulgaria into a looted, corruption-ridden country, the poorest in the European Union. They want to make you lower your expectations. To abandon your pursuit of a better life.

Of course, there are these new messiahs who promise a revival based on hatred. To leave the European Union, to leave NATO, to return Bulgaria to the three seas it once had. What they think you are - naive! Such false statements are uttered by the pound, but in reality, you will know them by their actions when they voted against the government together with DPS and GERB and blamed the anti-corruption legislation.

I don't even want to talk about the Trojan horse in the government, Slavi Trifonov, because I believe that he is already part of history. While he was singing about Macedonia, his ministers wanted the next billions without control.

Do not allow such politicians anymore! Demand more! Bulgaria can do more. In the short 7 months, we have seen how 2 billion can go to economic measures for all people instead of the pockets of the twenty someones.

We have seen how business can run smoothly when institutions are not used as a baseball bat to scare them but are there to help business. Let every businessman remember how just a year ago he was afraid of his success. Will the NRA or the BABH come for the racket. We must all say - never again will we allow a handful of people to rob our funds, our businesses, our initiatives, our dreams.

Despite the world crisis that coincided with our seven-month rule, we leave the office on a very solid foundation. It builds on the energy measures we've put in place to give you peace of mind and predictability in the coming months.

• We granted subsidies for heating in the winter.

• We've made sure you don't feel the rise in electricity prices in Europe. We have extended compensation for businesses as well.

• In seven months, we got Bulgaria out of the energy trap of the previous government. Part of the entrapment with heavy dependence on Russian gas is the pouring of BGN 3 billion into "Balkan Stream" - the pipe built at the cost of dozens of violations, from which we do not receive a single molecule of gas.

• We enabled the caretaker government to secure cheaper LNG until spring. With the launch of the gas connection with Greece, which we built in just 7 months, you can already feel a significant reduction in prices from the end of September.

• We had to extend the measure to reduce the price per liter of fuel that you pay at gas stations. Because the only institution that can lower prices in a market way - the regulator KPC - refuses to investigate cartel agreements.

While the official cabinet prepares the organization of fair elections, it will not have to put out fires in the social system.

• Because for the first time we brought pensioners above the poverty line - with an unprecedented increase in pensions.

• We provided tax breaks and benefits for families, for children, for the elderly. This fall, hundreds of schools and kindergartens will finally be renovated.

• We increased the salaries of doctors. We have provided much more research for patients.

We leave the caretaker government with a budget surplus of BGN 1.5 billion.

We secured 13 billion from the EU Recovery and Resilience Plan, tied to the adoption of anti-corruption legislation and measures.

And speaking of corruption, I rely on the new ministers not to forget that our government was brought down so quickly because we hit the schemes for billions siphoned from road building, from border control, from railways.

For ten years, this money enriched twenty selected people, instead of going to children's hospitals, support for families, for you. This fight must continue.

But in order to win it, the prosecutor's office must open its eyes to the visible, serious abuses, violations and crimes committed for years by those close to the previous government. None of you deserve electoral fairness and justice if you happen to get in their way. That is why it is important that, despite the opposition in the parliament, we closed the club called specialized justice. Importantly, we now have a mechanism to investigate the untouchable Attorney General. It is important that the European Public Prosecutor's Office can work independently in Bulgaria. This should be just the beginning.

During these seven months of management, we often tripped over our own growth mistakes. We learned our lessons in a very short time.

Our government fell in parliament with the help of a group of dependent MPs. But more importantly, it didn't fall in front of you. We fulfilled our promises, we did not violate our principles in the name of the cause of Bulgaria.

We know we still have a lot of work to do – and we're determined to get it done!"