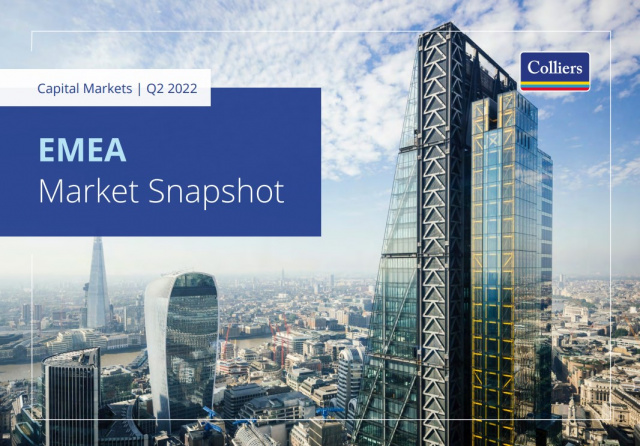 Economic uncertainty is beginning to impact investment activity in Europe’s commercial real estate (CRE) market, as shown by the data recorded for Q2 2022 in the latest Capital Markets Snapshot for Europe, the Middle East and Africa (EMEA) by Colliers. Providing balance, the Q2 assessment also suggests that the forecast of any impacts will vary widely, with a continued appetite for specific sectors and sub-markets.

Declining growth projections, rapid price rises, tighter monetary policy and Russia’s ongoing war in Ukraine led to a wait-and-see attitude among investors in some major markets. In the UK, investment volumes slumped to £10 billion (€11.8 billion) in Q2 from £17 billion in Q1, with a slowdown across asset classes despite major transactions continuing in key centers. Germany also saw a rapid reversal from the optimism of the first quarter, although a strong Q1 contributed to an overall investment of €28.4 billion in the first half of 2022, the second-best half-year performance of the decade.

Summarising market activity for Q2 2022, Luke Dawson, Managing Director, EMEA Cross Border Capital Markets at Colliers, said: “Concerns about the economic outlook and rapidly increasing debt costs saw softening demand, particularly in the core end of the market across most asset classes. However, the end of most COVID-19 restrictions has fuelled a boom in leisure travel that is bringing interest back to the hotels and hospitality sector, particularly in the tourism hotspots of southern Europe. While uncertainty is expected to persist in the latter half of 2022, any broad downturn is likely to be accompanied by bright spots in certain sectors and sub-markets as investors look to unlock value.”

Amid an overall slowdown in the UK market, major Q2 deals concluded in cities such as London, Birmingham and Glasgow, with investors zeroing in on mixed-use developments that incorporate both residential and commercial units. These included GIC Real Estate’s £694 million acquisition of a majority stake in London’s Paddington Central.

After months of sluggish activity, France’s office sector saw some sizeable deals, including some outside the capital. The Rio building in Paris’s central business district was bought by M&G Real Estate France from ARDIAN for €270 million, while Swiss Life REIM sold the high-rise La Marseillaise tower in Marseille to 2 SCPI for €250 million.

Investors in Germany’s CRE market were driving harder bargains in Q2, with a widening spread between the bid and ask prices. Based on ongoing transactions, Colliers estimates price reductions of between 10 to 25 basis points for office assets in Germany’s top seven urban investment markets, likely driving up yields beyond the 3% mark.

Signs of a revival in the hotel sector were clearest in Italy over the quarter, as tourism makes a comeback. Two of the most notable were in Rome, with the Hotel Majestic changing hands and Four Seasons purchasing an office building in the historic center of the capital to convert.

Residential in focus in Denmark and Ireland

The living sector remained the main investment target in some smaller European markets. Denmark saw transaction volumes of €3.2 billion over the quarter, up almost 30% from the same quarter a year previously, with almost half attributable to residential rental properties. In Ireland residential represented 36% of total turnover, versus just 22% compared to offices. The top three deals were all private rented sector assets in Dublin.

Colliers is a leading diversified professional services and investment management company. With operations in 62 countries, our 17,000 enterprising professionals work collaboratively to provide expert real estate and investment advice to clients. For 27 years, our experienced leadership with significant inside ownership has delivered compound annual investment returns of 20% for shareholders. With annual revenues of $4.3 billion and $77 billion of assets under management, Colliers maximizes the potential of property and real assets to accelerate the success of our clients, our investors and our people. Learn more at corporate.colliers.com, Twitter @Colliers or LinkedIn.